General Hospital Recap and Weekly Review May 12 – May 16 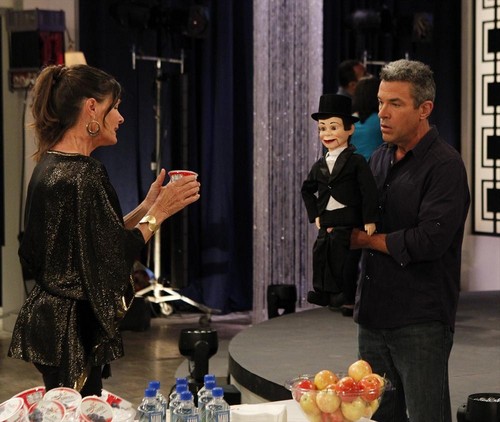 Monday 05/12/14 – At the Nurse’s Ball Lucy chases Milo around and off the stage. Epiphany demands their boxers for them.  Sonny tries to get Olivia to let him make things right but she isn’t having any of it.

Nikolas surprises Liz by showing up with Spencer. Spence mocks Cameron’s suit. Ric breaks it up before they get in a fight.

Lucy tells everyone Blackie Parrish is next…….but couldn’t make it so isn’t, he had a scheduling conflict.

Lulu asks Mxie to join her on her number. Maxie agrees. When Maxie goes back stage to find her costume she finds Nathan in his boxers instead.

Brad is playing creeper and spying on Lucas and Felix. Brad decides to serenade them both and so Lucy makes him the next to perform.

Next is Mac and his puppet which Lucy tries to stop. Epiphany helps out by stomping Mr. Marbles.

The Haunted Starlets perform next. Then Eddie Gomez.

Lucy is watching Scott. Olivia has her head down. Felix wants to know how Lucas really feels about Brad.

Olivia runs out. Spencer gets down in front of Emma on one knee and tells her he can’t live without her. Scotty flies into Lucy’s dressing room and tells Lucy she should have picked him and not Kevin. Ric wants Liz to give him another chance. Bitt tells Nikolas she still loves him.

Tracy and “Luke” toast to happily ever after. Then Ned shows up and informs his mother she is no longer CEO of ELQ Michael is. Tracy tells “Luke” they still have each other. “Luke” doesn’t look to happy.

Tuesday 05/13/14 – Lucas informs Brad that he is seeing Lucas now. Brad looks to Felix foe confirmation, Felix stays quiet. Liz tells Ric he can have another chance. Britt isn’t so lucky Nikolas can’t get passed her lies and deceit. Emma tells Spencer she is staying with Cameron. Scott chases Lucy up on the stage. Lucy admits she still wants him and they share a kiss just as the curtains go up. Kevin sees it all. Lucy runs after Kevin who pretty much walks out on her.

Scott thinks that he and Lucy can be together now that it is all out in the open. Lucy ask him to leave. Felicia shows up to comfort her. Mac goes with Kevin. Molly and TH are called on stage to perform. Britt joins Nathan and makes fun of him for staring at Maxie. Emma sings a song for Sabrina. Felix thanks everyone and then Epiphany gets up to sing the closing song.

Patrick and Sabrina are with their baby discussing names when his machine starts beeping. The doctor tells them the baby has a infection. He makes them leave. As the look at him through the window their friends and family join them.

Wednesday 05/14/14 – Carly and Franco are on a a flight to go anywhere to avoid giving AJ’s phone to Anna. Carly tells Franco she is determined to take Ava down and she finds it funny that AJ is the key. Franco thinks she needs to relax and join the Mike high club. After three tries Carly is the newest member.

Anna tells Duke she needs AJ’s phone to confirm something Carlos said. Duke wants her to use the information she has to take Juliann down. Anna refuses to work with Sonny. They share a tango before they share the bedroom.

Kevin is getting drunk. Kevin can’t believe how long Lucy has been lying to everyone. Scott enters and Kevin hits him. Scott tells Kevin he won’t press charges against him or Mac for the one he gave him a few months ago. Kevin then realizes Mac has known about the affair. Kevin hits Mac. Mac hits him back. They start fighting. They stop and share a bottle and a laugh.

Felicia and Lucy run into the paparazzi outside the Metro Court. Bobbie shows up and her and Lucy get into it first verbally and then by slapping each other. Lucy ask them bit to run the picture if her fighting with Bobbie. Felicia gets them to stop by handing over her Aztec necklace. Later Felicia deletes all the pictures and hugs Lucy. Scott sneaks out.

Alexis and Julian are in her bedroom. Afterwards he ask him to stay the night. Julian agrees to.

Jordan joins Shawn at Kelly’s. They talk about TJ and Molly. This and that. Then she brings up Tommy which causes a close moment which Shawn snaps out of. Shawn tells her thy he crossed lines with their jobs and can’t come back from it.

Thursday 05/15/14 – Lulu is playing with Rocco. Dante is trying to help Olivia feel better by way of phone all. When he gets off the phone Dante says is selfish and he promises Lulu he will never treat her that way. Later on Anna shows up and confirms that the embryo is theirs. Dante tells Lulu they can wait but lulu wants to go ahead with it now. Lulu doesn’t want a surrogate she wants to carry the baby..

Julian wakes up and puts a call into “Luke”. Alexis wants to know what that was all about. Julian distracts her with more sex. Julian tells Alexus he is happier than he has ever been. Alexis tries to convince him to leave the mob. When she ask who he works for he refuses to tell her. Julian doesn’t want her or anyone else he cares about in danger.

“Luke” is pouting about the ELQ takeover while Tracy is sleeping. Tracy wakes up when Julian calls. Tracy tells Luke he can have his phone back after he has sexy time with his new bride. “Luke” tries to get out of it by saying he is mad at Ned. Tracy spins it in a positive light and finally after “Luke” decides to pretend Tracy is Kiki he seals the deal.

Duke tells Sonny that Michael is the new CEO of ELQ. Duke wants to focus on bringing down the Jerome’s. Duke informs Sonny that Julian has a shipment coming in that night. Duke wants to get Anna involved. Sonny gets and hopes this will flush Julian’s partner out of hiding. After Duke leaves “Luke” shows up. He agitates Sonny by telling him he heard that the Jerome’s have Sonny on the ropes. Sonny ask if it’s him or Julian that’s plotting against him. Sonny leaves before “Luke” answers.

Jordan gives TJ a new car as a graduation gift. Shawn is sure she bought it with drug money. Jordan again threatens Shawn with blackmail.

Duke meets with Anna and tells her about the shipment coming in. Duke offers her a flash drive with the info in it. Anna isn’t she she doesn’t want to help Sonny. Anna wants something if she does this, she wants Duke out of the mob.

Friday 05/16/14 – Duke lets Sonny the Jerome’s r going Don tonight. Hn else over and Sonny tells him what’s going down. Shawn gets mad at sonny for going to the cops and tells him he is as bad as Julian. Shawn’s main concern in all this is TJ losing his mother. Duke tells Shawn not to warn Jordan.

TJ goes to see his mom and hears hear talking about a drug deal. Jordan lies and tells him she is importing vases from Columbia. Vases full of powder. Anyway believes her lie and they hug. TJ leaves and Shawn shows up.

After Julian leaves Alexis has Ric come over and she ask him to let Julian quit the mob. Ric tells her he isn’t Julian’s boss and when he swears on Molly’s life Alexis finally decide to believe him.

“Luke” gets a call from Tracy bout their lunch date. “Luke” reschedules it. Julian on around the corner nod informs him he I ui tying the mob. “Luke is not pleased. Julian tells “Luke” he now has something to lose. They fight back and forth but finally “Luke” shakes his hand and he wishes Julian good luck. “Luke” then he’d over to Alexis’ house with a gun.

Lulu tells Dante she wants to carry their baby. Dante gently reminds her she can’t. Lulu tells him there are surgeries she can have. Dante thinks it’s to risky. After he leaves for work Lulu calls and gets a appointment for a consultation.

Nikolas finds Liz at the hospital. Liz tells him she is moving out of Wyndmere. Liz tells him her and Ric are going to give it another try. Nikolas thinks it’s a mistake. Nikolas kisses her and she shoves him away. Liz tells Nikolas there will never be a time for them. She leaves and runs into Ric in the hallway.