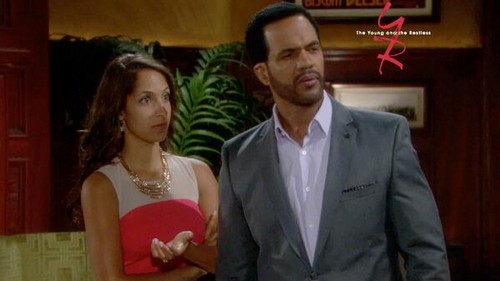 The Young and the Restless weekly review and recap – week of May 12 – 16 follows.  Did you miss Eric Braeden’s continued  attack on a Michael Muhney fan, click here to read all about it.

Monday 05/12/14 – Jack lets Kelly know that he wants to give them another go. Kelly knows that if Phyllis were to wake up Jack would want to be with her and that’s a chance Kelly isn’t willing to take. Kelly tells Jack she is letting him go.

Stitch shows up at Victoria’s and wants to know why she lied to him about the fundraiser. Stitch thinks he did something wrong. Victoria assures him he hasn’t. Stitch ask her about seeing her at the hospital again. Victoria gets upset. Stitch apologizes, kisses her and leaves. Victoria calls Billy and tells him she needs to see him.

Tyler and Abby are once again discussing Mariah. Tyler tells Abby he will take care of Mariah. Abby has a better idea she is going to bribe her.

Sharon still hypnotized says that she did something she shouldn’t have. The doctor ask her yesterday it was. Sharon screams that she shouldn’t be there. And then yells that she didn’t mean to hurt someone, Nick wants the doctor to snap Sharon out if it. Once out Sharon wants to go back under. Sharon tells her not to bring her out until she reveals the secret. Once under Sharon talks about her feeling of guilt, but she had to do the right thing. Sharon still can’t remember the secret. Sharon tells the doctor out of earshot of Nick that she thinks there is more to it. The doctor agrees to help her.

Tyler and Abby to Mariah’s hotel room. Abby offers her twice as much as her father did under the condition she leaves town. Mariah shares a look with Tyler. After they leave she looks at a newspaper story about a mansion robbery in Portland. I think some of the puzzle pieces are falling into place.

Victoria is talking the baby and tells it no matter who it’s father is it will have a good life. Billy cones in. Victoria wants him to say with Johnny while she goes to see Reed in D.C.

Stitch and Chelsea are talking in the park. Stitch offers to buy her ice cream. Chelsea tells him it made her sick even she was pregnant. Stitch tells her that’s the case for a lot of women. All of a sudden Stitch realizes something.

Abby is bitching at Tyler about Mariah. Abby doesn’t like the closeness she felt between Tyler and Mariah.

Tuesday 05/13/14 – Jack runs into Nikki and finds out she moved out of Victor’s. Jack goes with Nikki to her suite. Nikki tells him she knows he is still in pain over losing Phyllis. When Jack leaves Nikki calls someone and tell them she needs to see them.

Downstairs Chloe is thinking about Billy and her having another baby together. Jeff wins betting on horses and snuggles up to Gloria.

Stitch shows up at Victoria’s and Billy opens the door. They argue which is nothing new. Stitch plays with Johnny. When Jack shows up Billy is still trying to find out about Stitch online.

Paul is flirting with his wife on the phone. It’s baby making time when he gets home. Michael and Lauren come in to talk about Kevin and his sham of a marriage to Chloe. Paul tells them if he and Chloe divorce she will go straight to the nut house. Nikki then shows up and yells at him for arresting Dylan.

Kevin and Dylan are talking about their relationships. Kevin states even though he and Chloe are married they aren’t nearly as close as Avery and Dylan. Dylan sees Stitch and tells him about his altercation with Ian. Stitch tells him about his newest insult fest with Billy.

Chloe warns Kevin that his mom is all up in their business. Kevin’s mother starts telling Chloe about a aphrodisiac that drives Jeffery crazy. Chloe looks like she gets a idea.

Kevin gets a call from Billy who wants his to do a background check for him.

Dylan shows up at the station as Nikki is letting Paul know how much she loves and cares about Dylan. Nikki tells Dylan to stay away from Ian and then kisses his cheek.

Stitch gets a nurse at the hospital to get Victorias lab work for him by lying and telling her he works for Dr. Chiverton. Stitch sees that Victoria is pregnant.

Wednesday 05/14/14 – Victor shows up at Chelsea’s to get her for Adam’s memorial. Anita shows up to babysit Connor for her.

Chloe goes to see Billy and when he leaves to get coffee Chloe takes out some if the aphrodisiac she stole from Gloria. Chloe slips it in Billy’s coffee. After awhile it kicks in and they end up kissing. Billy knows Chloe somehow made it happen. Billy urges her to talk to her therapist.

Colin is still trapped in the attic. Jill answers the door. Lauren is looking for Esther. Jill tells Lauren she isn’t there. Lauren hears Colin banging. Jill tells her it’s the plumbing.

Jill goes to see Colin and refuses to let him go until he signs the divorce papers. Cane finds Colin’s
Anita calls Chelsea about a maintenance man who wants in. Chelsea okay’s it. Victor is ready to start. After the memorial Chelsea ask Victor if he loved Adam. Victor tells her yes. Chelsea leaves.

Anita locks the door behind the maintenance man. When he gets outside he calls someone and says it’s done. Adam is watching Connor and Chelsea on a laptop.

Thursday 05/15/14 – Jill offers Colin water and some crackers. Jill thinks he is back up to no good even though Colin insist he isn’t. When Jill leaves he finds a journal and starts reading it.

Cane meets with Victor and shows him Colin’s wallet. They are working together to find him.

Sharon, Jack and Chelsea are together. Sharon brings up the secret she is keeping from Nick that she can’t remember. Sharon says that Phyllis knows what it is. Jack tells Sharon that Phyllis may never come back from Port Charles I mean recover. Jack offers to take care of Chelsea’s sublet and then leaves. Sharon warns Chelsea againt getting to close to Victor.

Cane tells Jill he found Colin’s wallet. Cane ask if she knows anything about the Bonaventure card he had in the wallet. Jill doesn’t. Jill ask Colin about it but he won’t tell her anything. Colin tells her he knows how to open the music box. Jill tells him he is lying. Colin keeps reading the journal. Victor stops by later to ask her the same question.

Lily tells Devon Kelly told her Neil is seeing someone. Kelly is going to see the sublet. Neil is in bed with Hilary. Devon she then kissing goodbye when Neil is leaving.

Friday 05/16/14 – Victor thinks Cane is holding back and not telling him everything he knows. Cane insist that’s ridiculous. Devon confronts Hilary after his dad leaves, things get heated and she slaps him. Lily is asking Neil who the woman is when Devon walks in and informs everyone who Neil is seeing. Lily can’t believe it’s Hilary.

Sharon tells Nick she would rather not spend time outside. Sharon tells him she is headed to see Mariah. Nick says it’s a bad idea. Sharon wants to know more about her.

Tyler gets photo message from Mariah of the two of them together. Baby sees it and Tyler tells her it’s just Mariah trying to make Abby angry. Abby deletes the photo from Tyler’s phone. Tyler admits to Leslie he feels bad for Mariah because she has no one. Leslie tells him it sounds like Mariah has him.

Jack and Kelly argue at Chelsea’s sublet. Kelly finally gives in and kisses him and then they leave together.

Mariah’s wants to know why Sharon is there to see her. Sharon thanks her. She tells Mariah that because of her she underwent hypnosis and now if her memories are coming back. Sharon wants Mariah to stay in touch.