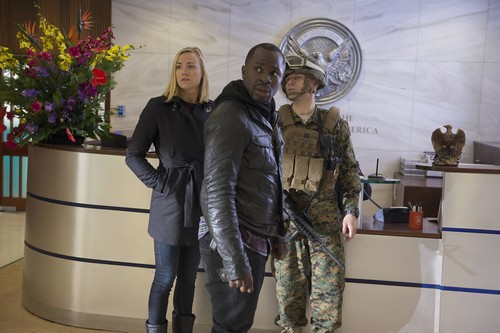 Here is our review of 24: Live Another Day episode 4.   2:00 pm – Jack’s riot is in full affect. Jack gets into the Embassy amidst all the chaos. Jack tells Chloe he has to get the flight key and get out of the Embassy as quickly as he can. Jack needing to take out a bit frustration chokes a guard out. Jack needs Chloe to tell him where to go, hell isn’t a option so she directs him to the room and tells him he will need a access pass. Jack has the pass and takes off for the room. Chloe knows Adrian is the reason Jack got caught. Adrian says it’s all Jack’s fault because he wants Jack out of Open Cell. Adrian tells Chloe that their job is to expose governments and their secrets not to help them. Chloe is beyond pissed and tells Adrian to get out. Chloe is going to help Jack no matter what. Chloe can get security camera access and she can walk Jack through it. One of the hackers tells Chloe the building is full of marines. Chloe makes it clear she wants Jack out of there alive and in one piece. Chloe wonders who Adrian was trying to help.

Kate and Ritter tell the guards that Jack is in the Embassy and is headed for Tanner. One of the guards tells them he will take them to Tanner.

Jack finds and uses the access key to enter Tanner’s room. Denovo is there as well. Jack tells them there was a security breach. A phone starts to ring and Jack tells then if they don’t come now he won’t be able to get them out safely. Denovo lunges for the phone and Jack knocks him out. Jack turns to Tanner and tells him he knows his drone was hacked and there is a major attack being plotted. Jack needs the flight key to stop it. Tanner ask Jack why he should trust him. Jack tells him because he is the only one who believes him. Tanner tells Jack the key is on Denovo. Jack gets it and Chloe tells him that Kate and Ritter are headed his way. Jack takes off. Chloe guides jack to a stairwell. The guard sees Denovo on the floor when they come in and he calls for a medic. Kate ask Tanner about Jack. Tanner stays quiet. Denovo is the one who tells them that Jack to off with the flight key.

2:09 pm- The guard shuts down the all access passes. Jack knows he can’t get out. Chloe tells him he will end up back in prison. Jack gets clever and starts following the wires in the ceiling to the communications room. Jack plans on sending Chloe the data from the flight key since he doesn’t think he will be able to get out of there.

Navarro has Kate on the phone and wants to know why the Embassy is locked down. Navarro is sure Jack and Tanner are working together. Kate says that Jack didn’t try to get Tanner out he just took the flight key. Kate lets Navarro know she is hunting down Jack.

2:19 pm- Jack puts a gun to the head of the guard at the communication room in order to get in. Jack plugs the key in and Chloe sends him a secure IP address. Jack makes Chloe promise that no matter what happens she will get the information to Heller. It shuts down and Adrian says it needs to be decrypted. He sends the decryption key to Jack. Chloe tells Jack he needs to find away to get some extra time. Jack wants to know if the guards are bullet proofed. Chloe tells him they are. Jack has a woman open the door and he shoots at the guards. The guards return fire.jack has the woman close the door and he tells everyone to get down.

2:23 pm- Simone is having a cup if tea with her mother. Simone tells her mother that Navid does not want to go through with his end of the plan. Simone says Navid is planning on taking off. Margot tells her daughter she has worked to hard to let anything or anyone get in the way. Simone’s mother tells her she will do WHATEVER it takes to make Navid do her bidding.

Mark gets a call. It’s Navarro and he tells him that has taken hostages in the communication room of the Embassy. Navarro lets Mark know that Jack can no longer remain a secret. Navarro says Heller will know soon.

Chloe tells Jack the decryption will take 20-30 minutes. Jack gets a call. Jack tells them if they come in he will kill the three hostages.

2:28 pm- the guard leader wants to go in. Jack lets the three women know he is not going to hurt them he just needs them to think he is. Jack tells them to stay calm.

Kate talks to Tanner. He tells her he just met Jack and that he is the only one who believed him. Tanner tells her that Jack knew his drone was hijacked and that another one was planned for today. His key will help stop it. Kate thinks there is something to the story since Jack told her on the tower that a attack was coming. Kate says she needs to talk to Jack.

2:32 pm- Mark wants to talk to Heller in private. Mark tells him all about Jack, the Embassy and the hostages. Audrey knows this means they will kill Jack. Heller says no one is shooting Jack, he wants to talk to him. Heller tells Mark to get him Jack.

2:37 pm- data is at 60%.
Simone goes to see Navid with her mother right behind her. Margot tells Navid she will give one chance to change his mind. Navid says he will not kill innocent people. Margot calls Simone over and a guard grabs her left hand. Simone wants to know what her mother is doing. Whatever it takes Simone whatever it takes. A guard takes off her pinky with a chisel and a hammer. Navid gives and says he will pilot the drones. Bet Simone never helps her mom out again.

Kate want to get to Jack. The guard tells her it’s a no go. Kate notices that Jack hit the guard where the vest were so as not to harm them. Kate calls Navarro and tells him Heller needs to talk to Jack. Kate wants him to make it a three way call. Navarro says he will. When Heller calls Jack answers the phone. Heller reminds Jack that he shit two people. Jack corrects him he grazed them. Heller ask him what he is up to. Jack tells Heller there is going to be a terrorist attack using drones. Jack tells him Margot has the device and is going to use it today. Heller wants to know why Jack is in that room. Jack tells him he is sending the information through to people who are helping him. Jack needs 15 more minutes. Heller ask Jack why he just didn’t come to him. Jack says it’s because it was his state department that put him on the watch list.

Heller wants to know if Jack could be telling the truth. His security chief tells him it isn’t. Mark informs Heller that Jack broke Chloe out and is working with Open Cell. Audrey says what if Jack is telling the truth. Mark calls him a terrorist and Heller reminds him he doesn’t know Jack. Mark finally convinces Heller and he says to have the marines go in when they are ready.

2:46 pm- The data is at 69%. Chloe wants Adrian to help her prove what Jack is saying is true. Adrian’s got nothing. Adrian wants to know why she can’t let Jack go. Chloe walks away.

One if the guards tells his men to keep the hostages safe. But one in particular he tells to shoot Jack as soon as he gets a shot.

Kate calls Navarro and says all of it makes sense. Jack’s info on Margot checks out but what Heller says goes.

Kate sneaks into the communication room through a grate to convince Jack to come peacefully.

2:53 pm- Audrey rips Mark a new one about his personal vendetta against Jack. Audrey walks away.

Chloe lets Jack know they are cutting off access to the cameras. Jack knows that means they are planning to take him out. Jack will hold them off as long as he can. Chloe wants him to give himself up instead of being killed.

The guard who is supposed to shoot Jack notices another pocket of heat in the area. Ritter pops up and tells them it’s Kate. When Jack hears her in the shaft he shoots at her. Kate yells that she is unarmed and to let her in there. Jack does.

Kate tells Jack she believes him. Chloe tells Jack to trust her. The door blows open and Kate tells them this is now a CIA matter. They back off. She gets Ritter’s cuffs and grabs the flight key. The download to Chloe and company stops. The sniper is still ready to take out Jack but puts his weapon down after a stare down with Kate.

Simone is in bed with a bandaged hand. Navid is elsewhere sitting at a piloting station. Margot’s son says they are online. Margot wants her son to find the 10 drones that are heavily armed in London for Navid to take over as pilot of. Margot ask Navid if she has made herself clear. Navid says yes.