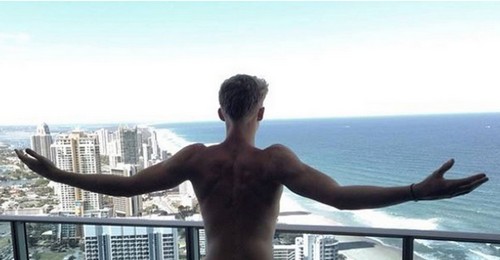 Cody Simpson posted a photo of his completely bare backside yesteday morning, clearly ignoring Instagram guidelines requesting no nudity. It’s not surprising that the photo was quickly pulled down from the site following a litany of complaints, but what’s interesting is that Cody apparently didn’t expect a backlash to his photo. I guess he thought his fans would fawn over the photo and it would be a quick way to gain some publicity, but I don’t think he expected any negative backlash.

To be fair, the photo was pretty racy, and there was no way that it would have stayed on social media without causing a massive furor among the users. The photo showed Cody standing over a Miami balcony with his arms stretched wide and his back to the camera, and not wearing a stitch of clothing. According to Cody, his ‘bae’ took the photo, which users are interpreting as his on-again/off-again girlfriend, Gigi Hadid. He captioned the photo, “Free. throwback to Sunday morning on the coast after a big one. surfed out too. how bout that tan. taken by bae.”

However, in the hours that the photo has been pulled down and the backlash has been building over what people perceive to be Cody’s shameless publicity stunt, Cody has responded with his thoughts behind the photo. He released a statement saying, “My post on Sunday was merely meant to make my fans laugh on a Sunday evening. It was a shot I had from my last trip home on the Gold Coast and I certainly didn’t intend to offend anyone. I respect FB and Instagram for their content rules and I do not fault them for it.”

Well, at least he apologized, right? It’s a lot more than most celebrities would do in the same position, so good on him for realizing his mistake and correcting it as soon as possible. This way, people can put the whole ordeal behind them, and Cody comes out of this looking less like a desperate attention-seeker.