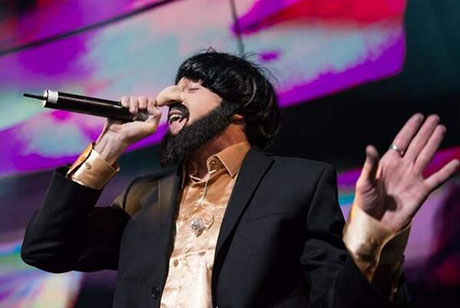 Who ever thought that Macklemore would come under criticism for being racist? He has a reputation for being one of the nicest and most down-to-earth rappers in show business, and this latest bit of news is quite unfortunate. Macklemore has come under fire for an outfit he wore during his performance at Seattle’s EMP museum, which many dubbed to be that of a racist Jewish stereotype.

Photos from the performance show Macklemore wearing a bushy black wig, a thick black beard, and a large nose. Many assumed that Macklemore was making fun of Jews with his costume, considering that all the elements of his costume are stereotypes associated with Jewish people. Even celebrities like Seth Rogen pitched in, writing, “@macklemore, first you trick people into thinking you’re a rapper, now you trick them into thinking you’re Jewish?” Several fans also pitched in, with one writing, “For those who don’t know, @macklemore performed ‘Thrift Shop’ dressed as a racist Jewish stereotype. Idiot.” Another wrote, “Check out @macklemore performing “Thrift Shop” as a stereotypical Jewish man. So much for same love, eh?”

However, Macklemore defended himself once the criticism went viral, taking to Twitter to write, “A fake witches nose, wig and beard = random costume. Not my idea of a stereotype of anybody.” According to certain reports, Macklemore only donned the outfit to avoid recognition before the performance, although they don’t explain why he didn’t remove it once it was his turn to come onstage.

What do you guys think? Did Macklemore honestly make a mistake here, or was he making fun of Jewish stereotypes? Honestly, even if he did make a mistake, it’s not one that should be taken lightly. All the elements of his outfit were too coincidental to not be planned in advance. Do you guys agree? Let us know your thoughts in the comments below.