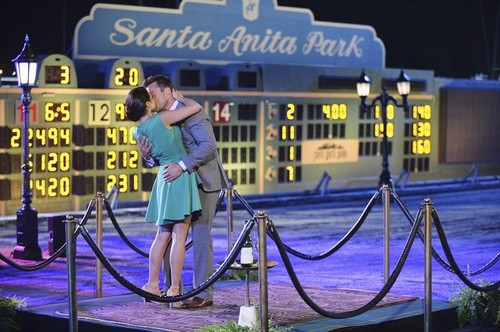 The premiere of the Bachelorette has already aired this week to much fanfare, and we’ve gotten our first real look at all of the men vying to win Andi Dorfman‘s heart this season. We’ve also got some spoilers for the next episode, in which Andi starts to narrow down her choices.

Bachelor Eric will reportedly be the first person that gets to go on a romantic outing with Andi, which he is very excited about. Andi and Eric head off on their date, leaving behind 18 disappointed bachelors. However, Andi’s date with Eric – while it goes very well – doesn’t necessarily result in any conviction from Andi on whether Eric is ‘the one’. They both head to the beach for what is seemingly a quiet date, but a helicopter swoops down and picks them up, taking them to the snowy Big Bear mountains. They are met by a professional snowboarder, and after a quick lesson, both of them take to the slopes. They top of the day with a fireside dinner, and you can tell that Andi’s intrigued by Eric, and especially his tales of travel and adventure. But you can also see Andi wondering whether Eric would ever put aside his traveling to settle down and start a family with her.

The next day, fourteen other contestants will all be invited a popular male exotic venue, and they’ll reportedly participate in a special event for charity titled ‘Bachelor Gives Back’. The contestants get divided up into different groups, and they all have to perform a risque routine for the audience. The men agree, although some grudgingly, because it’s for charity and they want to impress Andi. In the end, the whole thing is filled with its fair share of drama, although there are also plenty of entertaining dance routines. However, Andi starts to wonder whether the men are mature enough to settle down forever, especially as some of the antics during the performances are childish and immature.

However, it’s not until Andi’s last date with Bachelor Chris that things start to get interesting. Chris is treated to a fancy 1940s-style day at Santa Anita Park, where they both sit in their VIP seats and watch some horse racing. That night, they get treated to a special performance from popular acoustic duo ‘This Wild Life’ as they slow dance and sparks fly. Could Chris be the one? That’s what the producers want you think, but prepare to have the rug pulled out from under you over the next few episodes.

At the end of the show, three men are sent packing and sixteen contenders remain.