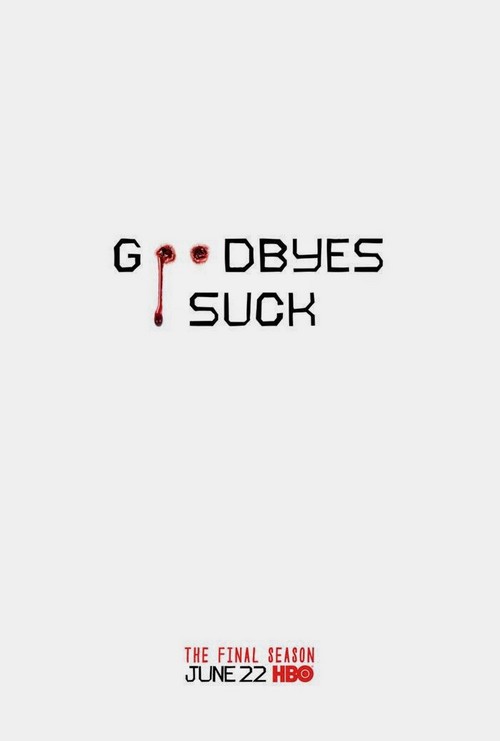 Sometimes, I wish HBO was more creative with their posters. Actually, let me rephrase – I wish the people behind True Blood were more creative with their posters, and promotional material in general. I mean, if you look at True Detective and especially Game of Thrones, their marketing and promotional material has been impeccable. So what’s the deal? Why does True Blood get stuck with shitty one-sheets when their fellow shows get glossy, detailed posters?

To be fair, True Blood has always gone with shitty one-sheets for their teaser posters, and this is only the first promotional image we’ve gotten from Season 7. They could be saving their good stuff for later, which I’m hoping is the case. Season 7 will be True Blood’s final season, so they really should be aiming to go out with a bang on every aspect of the show – even the marketing.

As you can see from the image, the poster basically has two words – ‘Goodbyes Suck’ – imposed on a large white on-sheet, with ‘The Final Season, June 22 HBO’ written at the bottom. Both the o’s in Goodbye have been turned into two dark puncture marks, with blood dripping down the first o. Again, quite similar to their previous posters – so at least they’re consistent?

As the Season 7 premiere approaches, we should start getting more posters, images, and eventually a trailer. So far, the buzz has been building quietly but steadily, and while the show is no longer lighting the ratings on fire, it’s at least managed to retain a consistent audience that cares about how it ends.

What do you guys think about the teaser poster? Let us know your thoughts in the comments below.