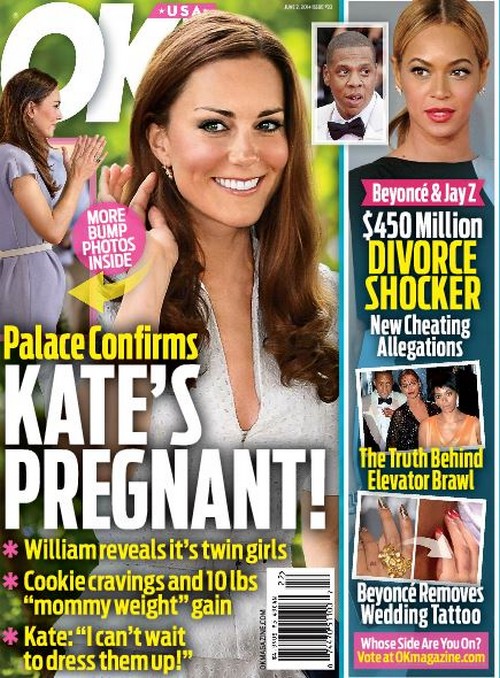 Is it possible that Kate Middleton is already pregnant again, this time with twin girls? The rumor mill has taken the Internet by storm, especially after Kate has shied away from public appearances after getting back from her Australia and New Zealand tour. Of course, it’s also possible that Kate is just tired and lazy, and doesn’t feel like going out when she could just be spending time with her baby, Prince George.

This report originates from OK! Magazine, so it’s doubtful that it’s actually true. If Kate was pregnant, then it’s definitely something that just happened – especially since Kate was seen drinking alcohol during the tour. And since it’s been less than a few weeks after the tour ended, I doubt Kate is already with child. But regardless, it is fun to speculate, especially with the rumor that Kate and Will be having twin girls next. That’ll provide George with plenty of entertainment, and he’ll have no doubt wreak havoc with his [potential] little sisters.

Plus, OK! source adds that Kate’s always wanted to have daughters, with a source explaining, “Kate’s upbringing with [Pippa Middleton] was idyllic and she always wanted to have girls of her own to carry on the legacy of strong, happy women. Plus, she thinks George having sisters will be tremendously good for his character.”

Well, you can’t disagree with that. Plus, I’m sure Kate and Prince William would probably like to have a girl next, since they already have a son now. But whether that will actually happen, we’ll just have to wait and see.