General Hospital Recap and Weekly Review May 19 – May 23 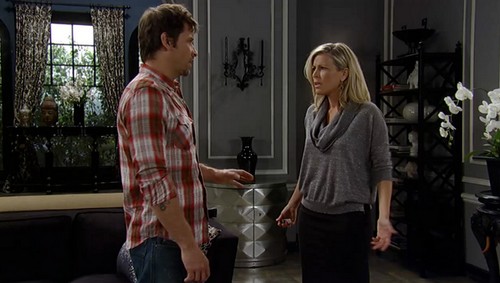 Monday- Silas is in a bad mood as usual. Felix brings him some flowers. All the card says is I miss you. It’s signed love me. We know it’s Nina. Silas thinks it’s Sam who sent them.

Lucas is spending some quality time with Sam and Danny. Julian comes over and invites them to dinner. Julian tells them he has some big news for them and they tell him they will be there. Lucas wonders who to bring as his plus one. Silas shows up later and starts kissing on Sam. When they come up for air she tells them they are going to a family dinner at Julian’s. Silas wants to pass. Sam convinces by telling him Julian has big news.

Lucas goes to the hospital to see Felix. Lucas apologizes for making Brad think that they are dating. Lucas ask Felix to be his plus one. At first Felix is unsure but with the promise of big news he caves. Lucas lets him know there are no expectations.

Shawn goes to warn Jordan. But they get in a fight and then Julian shows up and tells Shawn to get out. Shawn leaves without telling Jordan anything.

Julian warns Jordan that her new boss is a tyrant,

Duke tells Sonny all about Jordan working for Julian. When Shawn gets there Sonny tells him he wished Shawn had told him. Shawn tells Sonny he was going to warn her but nailing Julian is more important and TJ needs to know what his mom is really up to.

“Luke” arrives at Alexis’s gun in hand. “Luke” wants her to congratulate him. Alexis gets them a drink. TJ shows up to wait for Molly. Alexis calls Julian and he invites her to dinner. When Alexis returns “Luke” tells her he wants her to be as happy as he and tract are. When “Luke” gets outside he makes a call, he wants someone to teach Julian a lesson.

Tuesday– Nathan and his shirtless self helps Maxie with all her groceries. Maxie comes across her summons to court about her daughter. Maxie tells Nathan all about what happened and then tells Nathan she isn’t going. Levi ha convinced her it was jut a growth experience. WTH? Nathan disagrees and tells her she needs to go that giving up a chance to see her daughter out if fear is a mistake. I’m team Nathan. Nathan leaves and Maxie thinks about what he said. Maxie pulls the summons out of the trash.

Carly and Franco show up at Spinelli’s place in Portland. He is excited to see Carly but not Franco. Carly takes out AJ’s phone and explains the situation. Ellie comes out with Georgie and Carly goes gaga over her. Ellie is also not happy to see Franco. Spin works on the phone and in no time it is ready for them to listen to.

Anna and Dante are waiting for the drug shipment. Anna is happy she is about to take Julian down. Anna tells Dante that Carly and Franco disappeared with AJ’s phone. The shipment arrives and Anna is surprised to see TJ’s mom and no Julian. Dante tells her about his family dinner. Anna thinks it is his attempt at a alibi. She sends some cops to the docks and others to the gallery.

“Luke” meets with one of his guys at the park and tells him about Julian’s dinner at the gallery. He wants Julian back in line and tells the guy to pick one of three targets Sam, Lucas or Alexis. Lulu shows up with the baby and the guy leaves. “Luke” ask her where Dante is and when Lulu tells him he becomes angry. “Luke” plays it off as concern for Lucas but Lulu isn’t buying it.

Alexis gets to the gallery first followed by Sam and Silas the Lucas and Felix. After they eat dinner Alexis ask him to share his big news. Julian tells them he has left the mob and all his business will be legitimate from now on. “Luke’s” guy pulls out a gun and fires.

Wednesday- Carly and Franco are arguing with Ellie they refuse to let them hear the tape. They make them leave. Carly and Franco listen to the tape. They hear Ava confess to killing Connie then they hear the shot that killed him. Carly knows Sonny doesn’t know that Ava killed Connie. Carly is elated she can finally get Ava. Franco points out that AJ finally came through for her.

Shawn is sitting in the park when TJ shows up. Shawn tells him his mom is about to get arrested.

Ava calls Sonny from the island. Sonny tells her she is safe and her brother is going down tonight. Morgan shows up and Sonny tries to fix things to no avail. Morgan leaves. Shawn tells him the bust happened. Sonny calls Ava and tells her she can come back.

Lucas has been shot in the shoulder. Sam takes off after the guy but he gets away. Anna shows up while Silas is working on Lucas. Anna arrest

Jordan is also arrested. TJ tells her he is fine with her. When Anna shows up Jordan explains that she is a DEA agent and is undercover.

“Luke” meets with the shooter in the park. He tells him he shot Lucas. They chuckle over what a shame it would have been to shoot one of the Davis babes. ” Luke” takes the gun and kills the guy.

Thursday – Duke and Sonny are celebrating Julian’s arrest. Duke tells Sonny he is quitting now that the Jerome’s have been dealt with. Duke tells Sonny everything he knows will remain a secret. Sonny tells him there will always be a place fir him in Sonny’s organization.

Julian is at the PCPD. Julian wants Alexis to get him out. Anna brings Jordan in. Duke shows up and tells Anna he is no longer in the mob.

Sam shows up at the hospital. Nathan shows up with the shooter in a body bag. Nathan thinks Sonny shit him. Sam tells him that isn’t Sonny’s style. Sam tells Nathan her dad is leaving the mob.

“Luke” pulls a gun in Ned and threatens to kill him and make it look like a suicide. Tracy walks in and once again believes “Luke” over Ned. Ned leaves.

Ric and Liz are at Kelly’s with Molly. TJ show up and tells Molly about his mom. Ric worries about Molly. Liz and ri flirt a bit and then he takes her home.

Scott calls Lucy and leaves her a message. Julian gets a get out of jail free card by blackmailing Scott.

Lucy is at Kelly’s with Kevin. Kevin ask her if she is in love with Scott. When Lucy can’t answer Kevin tells her he wants a divorce and leaves. Lucy runs out the door and right into Scott’s open arms. Scott holds her while she cries.

“Luke” tries to kill Lucas in his hospital room by cutting off his breathing tube. Julian sees it through the window.