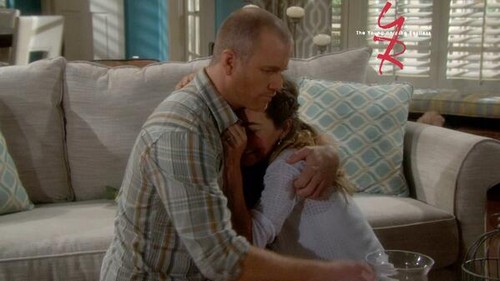 The Young and the Restless weekly review and recap – week of May 19– 23.  Did you missed the big Y & R news last week?  Burgess Jenkins replaces David Tom as Billy Abbott, all the scoop here.

Monday– Mariah finds that all of her money is missing. Mariah calls Ian and when he gets there she tells him all about it. Ian is certain there is someone who is willing to help her. Mariah tells Ian about Sharon’s visit. Ian tells Mariah to call Sharon and be honest with her.

Abby informs Victor that after everything he has done he owes it to her to get rid of Mariah. Victor makes a call.

Sharon and Nick argue over her need to help Mariah. Nick thinks Sharon is doing it because she looks like Cassie. Mariah shows up and Nick is rude to her. Mariah wants to talk to Sharon alone. Mariah tells Sharon about all of her money being gone. Mariah then points out she only stayed because Sharon asked her to. Sharon thinks she stayed to upset Abby. Mariah gets angry. Sharon gives her some money.

Stitch a message for Victoria he has something he would like to discuss with her when she gets back. Dylan gets in him for bothering her so much. Stitch gets pissed and leaves.

Abby shows up and tells Tyler Victor is going to take care of Mariah for her. Tyler gets upset. Ian finds Leslie and tells her that more trouble is coming. Leslie tells Dylan that legally he had to e Ian’s lawyer. Abby tells Tyler she wishes she could see Mariah’s face when everything comes crashing down.

Victor and Stitch decide to box one another to relieve stress. Billy is watching and when Stitch ask Victor about Victoria he comes out and is rude. Victor tells Billy he is a jackass. He calls Billy a loser and says Stitch is the one for Victoria.

Chelsea is trying to find out from Chloe what happened with her and Billy. Chloe tells her nothing happened. Chloe tires of Chelsea’s questions and leaves. Billy shoes up and informs Chelsea that Chloe is not doing well. They both agree she needs someone to take care of her full time.

Meanwhile Chloe is helping herself to Billy’s lab sample.

Nick argues with Sharon some more.

Mariah gets arrested for warrants in Portland.

Tuesday– When Victoria gets back home Billy tells her that Johnny is with Hanna. They talk about Reed and Victoria shows Billy a picture. Chelsea calls Billy and Billy lets her know he will be there shortly. Victoria dies t want to know what’s going on with him and Chelsea. After Billy leaves Victoria notices the calls she missed from Ben.

Jack hears Stitch let Kelly know he wants her to be happy. Stitch gets a message and leaves. Jack ask Kelly about Stitch and she gets upset. She leaves to meet the manager of the condo. Jack calls said manager and tells him he needs his help.

Chloe finds Kevin. She gives him the note from her doctor saying she’s been a good girl. Kevin and Chloe talk about how good she has been feeling. After Chloe leaves Kevin gets a call from Chelsea, she wants to see him right away.

Lauren and Chelsea are talking about their plan for Chloe. When Kevin arrives he finds Esther and Michael there ad well. Kevin refuses to go along with their plan until Billy arrives and tells Kevin how Chloe wants another baby with him. After that Kevin is aboard with putting Chloe back in Fairview.

Chloe is at the hospital having a nurse explain how artificial insemination is done when she gets a call from Chelsea asking her to stop by.

Avery receives a another message from her stalker.

Stitch is giving Victoria the third degree then finally admits he knows she is pregnant. Victoria is mad he went snooping. Stitch wants to know if the baby is his. Victoria tells him she doesn’t know. Victoria breaks down crying and Stitch tells her he will be there for her.

Kelly arrives at the condo, there is a white rose on the door. When she goes in there is a picnic set up. Jack is there. They talk and then kiss.

Chloe shows up at Chelsea’s and overhears what the group is plotting through the door.

Wednesday– Michael and Lauren are talking about the fact that Chelsea hasn’t heard from Chloe and that she missed her yet court-ordered appointment. Kevin begs Michael not to tell Paul. Kevin says he will find Chloe and take her to Fairview. When Paul shows up Michael says nothing. When Paul leaves Michael tells Kevin he doesn’t have long. Lauren thinks Kevin can find Chloe at the last place she was happy. Kevin leaves. Lauren and Michael are unsure if Kevin is capable of doing what needs to be done.

Nikki gets a sorbet from Ian who wants to celebrate his case being dismissed. Nikki is pissed. Ian wants to be friends. Nikki is chewing him just as Victor walks in. Victor rips into him next. Paul has to break it up.

It’s Paul’s birthday and Christine has baby making on her mind. After sex she brings out a cake, she lights the candle and they make a wish together.

Austin and Summer bond as they clean up after the taping of Avery’s show.

Avery comes home to Austin hugging Summer. Summer leaves. Avery tells Austin to stay say from Summer and then reminds him he had a girlfriend. Austin tells her they broke up. I honestly wonder if he isn’t the stalker.

Dylan promises Nikki he will stay faraway from Ian. Nikki wishes Victor would do the same.

Speaking of….. A guy hauls Ian into the alley. Victor is there and he tells Ian this is a fight he isn’t going to win.

Thursday– Sharon comes back home and Nick demands to know where she was. Sharon tells Nick she went to see Mariah but that she was arrested. Nick finds out Mariah was taken in for burglary and sent back to Portland. Nick wants Sharon to stay away from her. Sharon finds a traffic ticket from the day she and Phyllis got into it. Nick and Sharon go to bed. Afterwards Sharon takes out the ticket and stares at it trying to remember.

Neil runs into Devon who is upset with him for sleeping with Hilary. Meanwhile lily is upstairs arguing with Hilary. Neil shows up and after Lily leaves he and Hilary kiss and say they are falling in love with each other.

Paul asks Ian who beat the crap out of him.

Nikki knows Victor closed out her accounts and cancelled her credit cards, she tells him to fix it. Victor refuses as long as she is staying anywhere near Ian.

Dylan is talking to Leslie about Ian. Leslie tells him there is something she wants to tell him about Ian but can’t. Leslie gets a call from Tyler. Dylan gets hauled in for questioning for Ian’s beat down.

Tyler wants Leslie to defend Mariah. Leslie tells him no. Abby hears and is upset that Tyler wants to help her. Tyler explains he is helping her because Mariah kept him out of jail. Abby knows Tyler is going to Portland.

Dylan tells Paul that Ian is lying he didn’t touch him. Ian appears and says when he said Dylan’s name he wasn’t blaming him. Ian says he thought he was dying. Paul ask Ian who did it. Ian claims it was a random act of violence. Dylan wants to shake the guys hand.

Dylan goes to see Victor and tells him that Ian’s ex wife has information that can bring him down. Victor agrees to work with Dylan.

Paul sees Nikki and tells her Ian got beat up. Paul wonders if Victor is to blame. Nikki suggest that he let it go.

Friday– Jack and Kelly go to a movie but leave shortly after it starts.

Lily and Devon are doing shots. Lily wants Devon to deduce Hilary and then break up with her.

Chelsea sees Stitch and asks about Victoria. He thinks Chelsea is way to interested in their business. Billy shows up and ask if either of them think Victoria is acting weird.

Victoria calls Stitch and tells him she is having cramps and is scared. Stitch tells her he will be right there.

Billy tells Chelsea he thinks Victoria wants a divorce so she can start over with Stitch.

Stitch looks over Victoria and decides they need to go to the hospital just to be safe. Stitch tells her he won’t leave her side. Victoria finds out everything is ok. They go back to her place. Stitch offers to stay and she accepts they kiss. Chelsea calls and threatens to tell Billy Victoria is pregnant since she now knows she told Stitch.

Jack kisses Kelly. Jack lets her know Billy is away on business. They go upstairs.