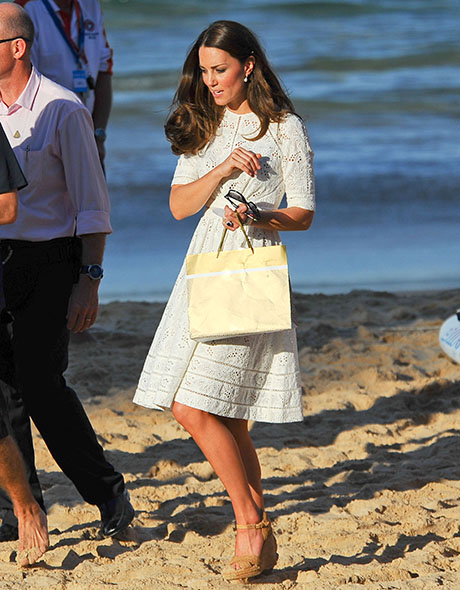 Kate Middleton may have thought that the Australia and New Zealand tour went extremely well, and it certainly seemed like that for the past few weeks. However, Bild Magazine [a German publication] has posted a photo of Kate’s naked bum up on their site, claiming that the photo was taken during Kate’s tour in New Zealand and Australia.

Kate’s definitely wearing the Diane von Furstenberg blue and white dress that she wore during the Blue Mountains visit, and considering that the gusts of wind were particularly strong that day, it doesn’t take a genius to figure out what happened. Some lucky photographer managed to get the shot of Kate’s dress flying up at exactly the right moment, exposing her naked bum.

Of course, Kate really should have planned ahead for this situation, considering what happened two years ago when she posed topless while on vacation. And this time around, this photographer not only did nothing illegal, but he was well within his rights to take photos of the Duchess taking into account that it was an official engagement and he was just one of many photographers there.

Unfortunately, for the royals, they know this, and sources have already gone on the record saying that Kate is completely humiliated by the situation. Prince William, on the other hand, is plain furious and wants to threaten the magazine to pull the photos down. I guess he realizes that doing that is the only way to get anything done in this particular instance, because suing them or taking them to court certainly won’t do anything.

We’ll keep you updated as we get more updates from the palace, but we should be hearing something soon from Kate and Will, unless they just choose to ignore the whole thing completely.