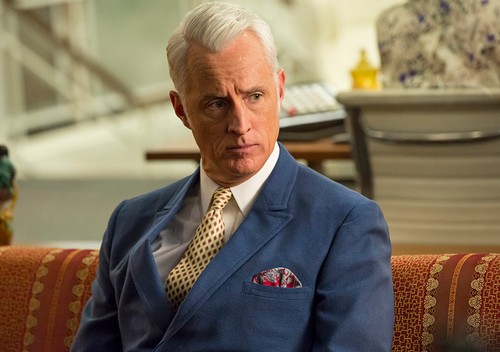 Did you miss the most recent episode of  MAD MEN season 7 episode 7, “Waterloo” the season 7 finale Part 1? If so, don’t worry! We have a great review for you here.  Here’s what happened during last night’s episode:

Teds flying the Sunkist client in his very own plane. The client jokingly ask if Ted can actually fly the plane. Ted thinking it is to funny cuts all the power to the engine.

Jim calls Ted and ask him if he wants to die. Ted doesn’t. Ted tells him he wants him to buy him out of the company.

Betty’s friend Caroline and her husband Rick show up for a visit and will be staying with Betty a few days. Sally shows their teenage son to the room he will be staying in,

Don’s assistant tells him about a letter informing him of a breach of contract involving Commander Cigarettes. Don tells her he needs her to get his attorney on the phone.

Don has it out with Cutler about him trying to throw him out of his own company. Cutler tells Don the contract was broken and it’s a done deal. Don gets all the partners out of their offices and has them vote. Cutler and Joan are the only ones who vote to get rid if Don. Don stomps off after he wins the vote.

Don calls Megan and tells her he isn’t sure if he is still going to Indiana. She tells him maybe it’s time he thought about leaving the company.

Bertram is discussing with Roger how Cutler is trying to get Don to leave the company. Bertram tells Roger that no man has ever come back after a leave.

Peggy, Don. Pete and Harry get on a plane headed to Indiana. Once there they go to their hotel rooms and watch the moon landing.

Roger gets a call informing him that Bertram has died. Roger is removing Bertram’s name from the door when Joan and cutler show up. Joan wants to call clients and explain the situation, cutler is still hell bent in getting rid of Don. Roger gets passed at them.

Roger calls Don and tells him about Bertram and that cutler plans on getting rid of him now that Bertram isn’t a deciding factor.

Don goes to Peggy and tells her he wants her to do the pitch the next day. Don tells her that if he were to get Burger Chef than the company would lose them upon his ousting. If Peggy gets then then it’s her client with or without Don at the company.

Peggy gives and nails the pitch the next day.

Don finds Roger waiting for him when he gets home. Roger tells him that McCann offered to buy the company. Roger would be in charge and they could get rid of Cutler.

The next day the six meet to discuss the offer. Roger tells them it’s for a 51% stock purchase and that they will walk away with millions if they sign five year contracts. There is just one little problem Ted wants out and without him there is no deal. Don gives Ted a pep talk and Ted decides to go all in.

After the meeting Peggy runs over and tells Don that they got the Burger Chef contract.

The show ends with Don watching Bertram singing “The Best Things In Life Are Free.”