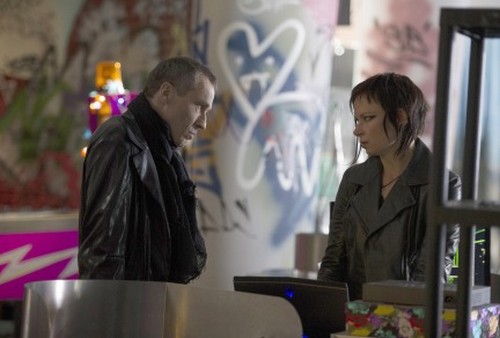 Here is our review of 24: Live Another Day episode 5.  Kate gets told by one of the heat headed Marines that she is going to be fired. Kaye is like whatevs I got Jack. They check Jack for the flight key which of course he doesn’t have it. Jack is not all about the cooperating. When the guy ask him where the key is Jack pretty much zips it. Kate claims to not know where it is either, it must have been lost in the raid such is life.

Kate walks out with Jack in toe. Kate puts in Jack’s earpiece and starts a conversation with Chloe. Kate wants to know what she needs for Chloe to help her. Kate checks off a computer and tells her she will call her back. Ritter wants to know what went down. Kate is cocky about the fact she saved Jack’s ass from near demise. Kate is now team Jack and is sure his intel on Margot is legit. Kate says they have to find proof Tanner’s drone was hijacked. Ritter is just pissed she took the key.

Kate tells Ritter he needs to focus up. They get in the SUV Ritter drops while Kate gets on her laptop and the phone to Chloe. Kate puts the key in and Chloe starts the download. Kate tells her she will have the data in two minutes. Kate tells Chloe to get proof the drone was hijacked and she will handle the rest.

Simone is getting what I assume passes for medical attention to her mother for the finger she had taken off last week. Margot comes and sits done next to Simone. Margot tells her she knows she is in a hella pain and it is her fault because she didn’t know what her daughters husband was up to. Margot kisses Simone on the head and Simone passes out from the pain. Margot heads downstairs to Naveed and when he ask about Simone Margot snaps at him. Naveed has one last chance at redemption and his time starts now.

Chloe and Adrian are looking at the data Kate sent. At first they can’t find anything and Chloe demands that Adrian looks harder. Adrian notices something and tells Chloe to stop. The override code was split into segments and put into a transponder signal. Adrian isolates it and shows it to Chloe. Chloe has the proof they need to prove the hijack and sends it to Kate. Kate calls Jordan and ask for Navarro. Kate sends Navarro the proof. Jordan realizes it’s a override code. Navarro tells Jordan their can be no mistakes. Jordan is 110% sure. Navarro gets on the phone to the President.

3:13 pm- Heller finds out that Jack is ok and the Embassy is safe and sound. Navarro calls Heller and Mark tries to intercept it but Navarro will not be swayed and Mark has no choice but to put Navarro on speaker. Navarro informs them that Kate proved Jack was right. Kate gets on and explains everything. Kate tells them that Margot has a device that will override drones. Heller wants all drones grounded worldwide. A stage 4 recall is issued. They all start going off online.

Margot sees it and tells Naveed to perform a override and get as many drones as he can.
A General lets Heller see the drones are responding to the recall. They also see that several don’t. Mark starts freaking out. Six drones are taken and they can no longer control them.

3:17 pm- the General informs them that the missing drones are first strike weapons and each one has six laser guided missiles that is capable of taking out half a city block. The drones are headed to London and will be there within the hour. Oh and to make it worse they are undetectable. Heller is pissed. Heller wants to talk to Jack. Mark tells him Jack is on his way.

Kate finds out when she gets back to the CIA that she is off the case.

3:24 pm- Jordan tells Navarro that he found a post by Margot on a Jihadist website. Margot is talking about the drone strike that killed her husband. The attack also killed twenty three people and six of them were children. Margot blames Heller and tells him he has three hours to give himself up or thousands in London will die. Heller wants all the information they can get on the attack that killed Margot’s husband.

3:28 pm- Adrian is watching Margot and when it’s over Adrian says that they need to go. Adrian wants Chloe to come with them. Adrian admits what he did to Jack was wrong but that he isn’t going to lose Open Cell.

Heller sees footage of the drone strike that killed Margot’s husband. Heller sees Margot crawl out of the building. Heller sees the kids and demands to know why he wasn’t informed of any of this. Heller is angry that Mark didn’t tell him any of it. Heller knows Margot can use this in her favor and that when she carries out her plan half the world will agree with her.

Jack is brought in by guards. Heller kicks everyone out so he can talk to him. Heller tells Jack they confirmed what he says was the truth and that Margot has six drones. Heller wants to know if Jack knows of a way to catch her. Jack just happens to know a arms dealer that can get ahold of her. Heller wants the guys name. Jack wants to be the one that talks to him. Jack refuses to give Heller the guys name. Heller tells Jack to think about before he leaves to meet with the Prime Minister.

3:37 pm- Margot wants to know if Naveed is on schedule. Naveed is and ask to go see Simone. Naveed goes to Simone and tells her she needs to see a doctor. Naveed also tells her he the video he put up for Margot is traceable and that he has evidence under the floorboards. Naveed tells Simone he loves her.

Jordan has found the IP address Naveed provided. Jordan tells Navarro it’s on a huge estate. Navarro and Ritter leave with the rest of the team.

Audrey goes in to see Jack and tells him they have a lead on Margot. Jack goes to her and they both get weepy eyed. Jack tells her he is sorry for everything that happened before and they press their heads together. Jack tells Audrey she needs to leave and she finally tears herself away from him.

3:46 pm- Kate is watching the video feed of the operation with Jordan. Kate is concerned and calls Chloe and ask her to help her because she thinks the IP address was found to easily. Chloe talks her through a way she can find the server the video originated from.

3:49 pm- Margot tells Naveed that her son figured out what he did. She has her guard beat and kick him, then he drags Naveed out. Margot then tells her son the Americans will get to the other address in five minutes and to make sure he kills them all.

Ritter and Navarro pull up outside the house as well as the rest of the team. They start sneaking in through the woods. Margot tells her son they will be in firing distance in about two minutes. Everyone is watching. The come up to the house and open a door and peek in. Chloe sees something in the video. Chloe calls Kate and tells her there was a security buffer missing. Kate tells her that a team is there. Chloe tells her it’s a trap. Kate calls Navarro and tells him he needs to get the hell out of there. Navarro tells the guys to get out. Margot tells her son to fire. Some of Navarro’s guys don’t get out. The video feed goes blank. Kate can’t get through to either Navarro or Ritter.

Margot has a gun. She tells Naveed that she treated him like a son. Naveed tells her that what happened to her husband doesn’t justify what she is doing. Naveed begs for his life. Margot tells Naveed to ask Simone what she wants. Naveed begs Simone but she doesn’t say anything, Margot shoots Naveed point blank in the head.