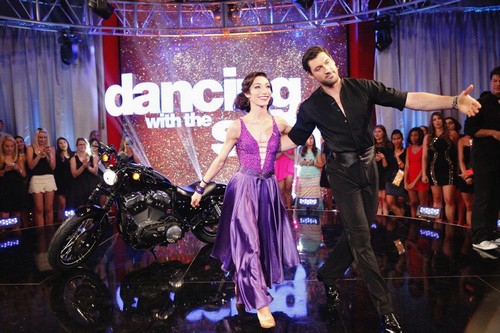 Maksim Chmerkovskiy has spent many years on Dancing with the Stars, and he’s not only racked up a huge public profile, but also enough money to last him a lifetime. Considering that he’s probably achieved everything he’s wanted to on that show, it’s not that surprising to hear that he’s thinking of departing the show for good come next season.

In a recent interview, Maksim seems pretty confident in saying that he won’t be returning for the next season of the popular show, telling audiences that he only stayed so long so that he could finally win the sought-after winner’s trophy. As he explains, “My goal was always to win and walk away, but I never won, so I could never walk away.” And now that he’s won Season 18 [finally] with Meryl Davis, does that mean he’s finally walking away?

It seems so, as he explains, “I don’t need to win the show multiple times to be satisfied. I need excitement. I hope I brought people happiness they were looking for when they were tuning in… Whether I come back or not, it’s not up to me. Maybe tomorrow something will change and I will say, ‘Let’s do this again.’ But I really don’t see that happening.” He also adds that he thinks it’ll be very difficult to replicate what he had with Meryl this season, and that’s probably true. His chemistry with Meryl was one of the reasons that they were such a fan favorite this season, and it’s obvious that there’s something going on between them. He probably doesn’t want to risk that and his future away the show by signing another contract for Dancing with the Stars, especially since his career won’t really grow any further if he stays on the show.

However, he’s also clearly keeping his options open because he doesn’t rule out returning to DWTS, only that he doesn’t think it’s likely. Nice save, dude. Nice save.