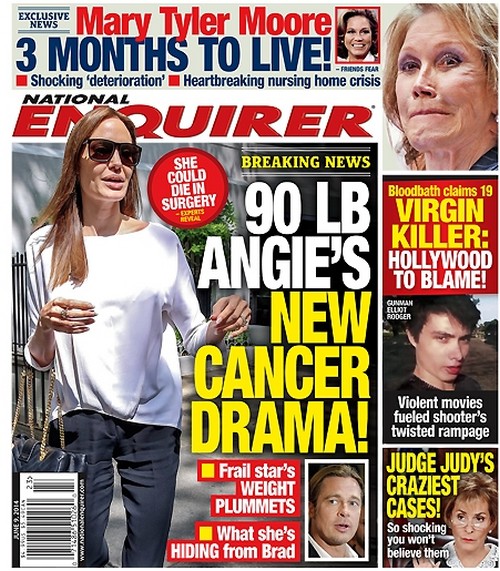 Angelina Jolie recently underwent a double mastectomy, but she still has one final surgery left to complete. She wasn’t able to finish the procedure last year due to her busy schedule [filming Maleficent and directing Unbroken], but she’s since stated that she’s planning on getting that last surgery sometime this year. However, a new report from the National Enquirer suggests that Angelina is dealing with another health scare, this time due to her rapid weight loss.

Apparently, Brad Pitt is very worried that with her drastic weight loss, she won’t be able to handle the final surgery without more serious health complications. A source tells the Enquirer, “Angelina plans to have her ovaries removed, and Brad is panicked that her fragile physical condition could cause the procedure to end in tragedy. Brad is fearful that Angie may not be strong enough to survive the operation. He’s worried sick about her!”

Right. He’s so ‘worried’ about her that he’s busy working on his projects while she travels alone for Maleficent promotion? Puh-lease. If she really was in any danger of major health complications, she wouldn’t even be promoting the film, much less promoting it without Brad at her side. The fact that she’s so skinny – and has lost so much weight recently – could be down to her eating habits, but I don’t think Angelina’s the type to put her health at risk by working too hard, especially since she was the one who initiated getting a double mastectomy so she could stay healthy for her children. Besides, she’s admitted in the past that she puts her health, her family, and her family’s health above all other priorities in her life, and there’s no way she’d be this busy with her career if there was something more serious wrong with her.