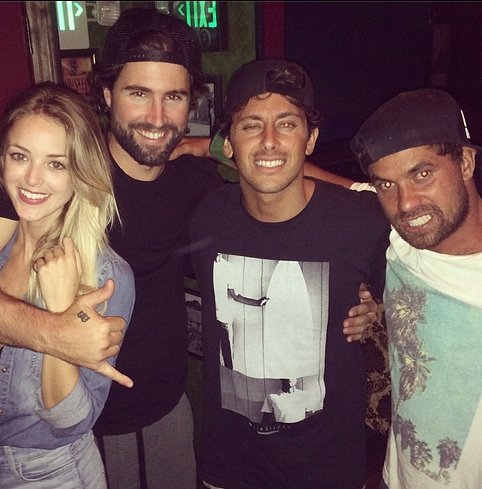 Brody Jenner didn’t attend his stepsister Kim Kardashian’s wedding in Europe this weekend, which wasn’t really much of a surprise. From what we know of Brody, he’s definitely the least-famewhoriest member of the Kardashian-Jenner clan [which isn’t saying much], and it’s clear that he wants nothing to do with his other ‘family’.

In fact, he says as much in a recent picture posted to Instagram. On Monday, he uploaded a pic of himself with several friends, writing, “Memorial Day w/ the fam.” He noted that the only people missing were his brother, Brandon Jenner, his mother, Linda Thompson, and his sister-in-law, Leah Jenner.He’s making it very clear that his ‘family’ no longer means the Kardashians, and that includes his father, Bruce Jenner. He’s clearly trying to disassociate himself with anything to do with the Kardashians, and it makes sense when you consider how much their name has been dragged through the mud in the media. They may be famous, sure, but are they respected? That would be a resounding no. Plus, Brody and Brandon are reportedly humiliated by their father’s rumored sex change, and it would explain why they’ve been staying away from the television show and most of the Kardashians’ media appearances.

If Brody really wants to make something of himself, he’d be smart in cutting off all ties with the Kardashians now, and it looks like he’s well on his way to doing that. He may never admit it in public, but his Instagram caption was admission enough. Why else would he use ‘family’ in describing his brother, sister-in-law, and mother, but not his father or his step-family?

What do you guys think? Is Brody Jenner cutting himself off from the Kardashians, or is everyone reading too much into an Instagram photo? Let us know your thoughts in the comments below.

Avril Lavigne and Brody Jenner Are Over