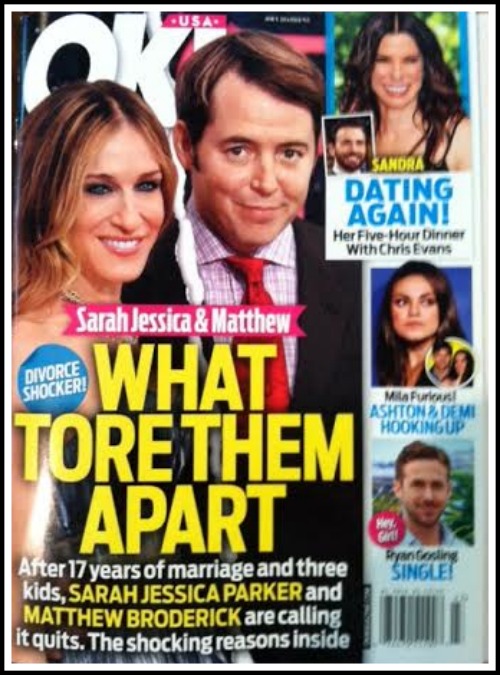 Sarah Jessica Parker and Matthew Broderick are reportedly getting divorced after seventeen years of marriage. The latest cover issue from OK! Magazine claims that Sarah and Matthew have reached their wit’s end when it comes to their relationship, and neither one of them wants to continue with the charade, despite having three children together.

A source tells OK!, “Those close to the couple say the relationship has disintegrated to the point where a divorce seems imminent.” Apparently, Matthew and Sarah have spent the last six years fighting over cheating allegations from 2008, where Matthew reportedly cheated on Jessica. This led to a huge blowout, followed initially by the two trying to reconcile and failing. My only question is – if the cheating rumors are true, why did it take six years for them to divorce? Unless there’s more to the story that we’re just not hearing.

Of course, considering the source material, it’s more than likely that this story is completely made up. I don’t doubt that Matthew’s and Sarah’s marriage isn’t perfect, but then again, what Hollywood marriage is? Most of them are fraught with complications, which are compounded by the fact that they live in the public eye and have to constantly deal with divorce and cheating rumors from the media.

Do you guys believe that Sarah and Matthew are having problems, and even if they were, do you believe that they would get divorced? Let us know your thoughts in the comments below.