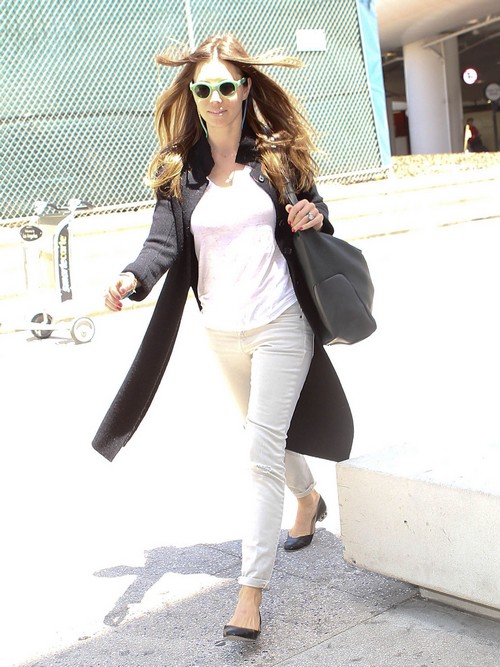 Television is practically made for actresses like Jessica Biel. In fact, I’m not even sure if Jessica is talented enough for television, especially since the quality on TV has been far surpassing that of film lately. However, she’s not going to have much of a choice soon, especially since she’s landed maybe one high-profile film role in the past two years, and that too as part of an ensemble. She may have the looks, and she may be married to Justin Timberlake, but that’s not enough to guarantee career longevity in Hollywood – a fact that she’s not starting to learn.

A new report from OK! Magazine suggests that Jessica has decided to go into producing reality TV shows to provide her a steady income. OK!’s source also adds that Justin is worried about Jessica’s move into reality TV, especially since he’s concerned that she’ll use Last Chance [a reality show that she’s producing] to explore her own marriage issues.

A source tells OK!, “He’s been dogged by rumors of cheating and putting work ahead of their marriage. He doesn’t want their problems used to pump ratings.” Well, of course he doesn’t. Wouldn’t want the whole world to know that he’s not the perfect husband, would he? Of course, the allegations of his cheating and affairs have never been proven, but there’s been enough said about the whole situation to raise eyebrows.

I can see how Jessica might be tempted to open up about her own marriage on the show, but I doubt she will. She won’t want to anger Justin, and secondly, she won’t want to ruin her [albeit flailing] career in film by actually starring in a reality show. Producing is all well and good, and it’ll be an additional income source, but reality television is where careers go to die – and Jessica knows that.