General Hospital Recap and Weekly Review May 26 – May 30 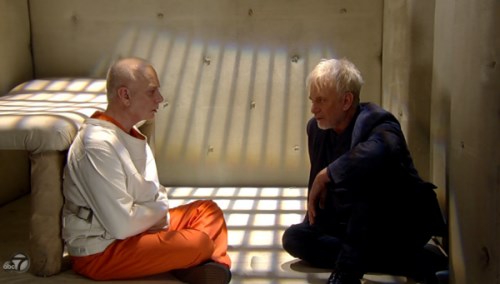 What follows is the recap and review for General Hospital week of May 26 – May 30.

Sabrina is with her baby. Patrick and Emma come and Emma gives her a stuffed animal for the baby. They discuss naming him and Emma suggest Early (lol). They finally decide on Gabriel Drake Santiago.

Cameron uses a origami heart to ask his mom out for Ric. Liz accepts and it’s a date.

Julian manages to stop “Luke” from killing Lucas but reminds jukian that he can kill anyone Julian has in his family. “Luke” tells Julian to get back to work.

Carly plays AJ’s recording for Sonny, she plays it again Sonny finally realizes what happened. Sonny realizes he killed a innocent man. Sonny lets it sleep that with Ava. Sonny decides he is going to kill Ava. Carly warns him to be careful.

Ava is on the phone with Kiki she wants a fresh start with her. A few minutes after they get off the phone Sonny shows up.

Wednesday– Alexis finds Julian at the hospital. Julian tells Alexis he will have to go back to the mob. Alexis tells him to just give Anna what she wants. Alexis kisses him and leaves.

Julian goes to see Anna and tells her he is ready to give her what she wants.

Carly is looking for a bartender when she finds Franco instead. Carly tells him Sonny knows all about Ava. Franco is shocked that Sonny hasn’t scorched the earth yet. Ric shows up and Carly tells Franco about all the horrible things he has done. Franco offers to give him a beat down. Carly is confident Ric needs no help in getting beat down. Olivia finally tells Carly about Sonny doing the nasty with Ava. Carly tells Olivia that it will never happen again.

Liz shows up to her rooftop date with Ric. Ric ask Liz to spend the night as they dance and Liz tells him she will.

Lulu and Tracy discuss her fathers odd behavior. Lulu like everyone else is fooled.

Sonny tells Ava he killed AJ but she killed Connie.

Thursday– Julian goes to see Anna and lets her know he will give up his boss. Anna isn’t interested. Scott walks in and instantly gives Julian what he wants. Julian gets on a computer and pulls up a picture of his boss. Anna and Scott are both stunned when they see the picture.

Kiki takes Michael his favorite take out. Things turn sexy and they end up doing it in his office at ELQ.

Ava stops Sonny from killing her by telling him that she is pregnant.

“Luke” has no choice but to go on a honeymoon with Tracy. Julian stops by and tells,him he winds and he will go,back to working for him. “Luke” tells him he planted evidence that will point at Ric as the shooter.

Liz and Ric end up in bed and afterwards Anna shows up with a arrest warrant, Julian named him as the head of the Jerome syndicate. Wow just wow just when you think Julian has finally gotten a clue.

“Luke” is at Miscavage. He is paying a visit till the real Luke.

Friday– Morgan gets cut off at the a floating Rib and gets pissed but before he can get kicked out its Olivia to his rescue. Morgan kisses her in attempt to get back at Sonny and Ava. Olivia tells Morgan no and then drives him home.

Ava is still trying to get Sonny to believe she is pregnant. Sonny doesn’t believe her so she shows him a positive pregnancy test. Sonny tells her they are going back to Port Charles and she will be sing a doctor. Sonny tells her if she is lying she is dead, if she is telling the truth she will be dead in nine months.

Ric denies what Julian said. Turns out it doesn’t matter what Ric says because they find a gun just like the one that shot Lucas and killed the shooter. Ric insist to Ali’s he is innocent as they drag him out the door.

Julian tells Alexis Ric was his boss. Alexis is stunned and has no idea what she is going to tell Molly.

“Luke” tells Luke it took a lot of planning to get this far. That he has been watching look for years, learning about his life. Faison? When he brings up Tracy Luke gets pisses and tells him to keep his filthy hands off her. “Luke” tells Luke that he is going to get rid of Sonny and that it’s good bye for now. Luke ask him who he is . “Luke” tells him wouldn’t you like to know.

Anna informs Ric the bullets used in both crimes are a match for the gun they found in his room. Anna also tells him his prints were all over the gun. Anna arrest him.

That is it for this week!!