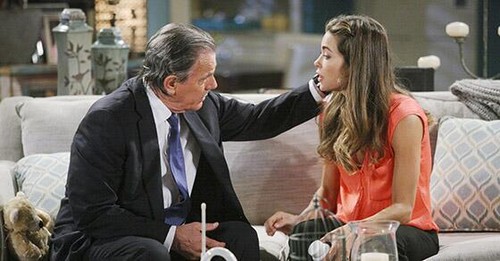 The Young and the Restless weekly review and recap – week of May 26– 30.  Did you missed the big Y & R news last week?  The big Y & R news this past week was Michael Muhney was spotted on the set.  Is he coming back?  Check out what went down, right here.

Monday– Dylan gives Avery a kiss. Dylan tells Avery that he marched in the Memorial Day Parade. Avery ask if he save her on the Talk, he hasn’t but is going to that night.

Jack and Kelly kiss are all cuddly after having sex. Jack goes downstairs and Summer shows up just as Kelly comes down. Summer tells Jack about Avery and the Talk then she leaves. Jack tells Kelly he has to fly to London that night. At first she is upset bit when he explains she gets over it. They have sex again. Jack wants Kelly to come to London with him but she tells him no and that they should take things slow.

Noah is talking with Nikki talk about living with Courtney.

Ian goes to see Victor and tells him he went of the police about getting his ass beat but that he kept Victors name out of it and therefore Victor owes him. Victor calls Ian a sociopath and kicks him out.

Noah and Courtney are making out at home. Courtney gets her handcuffs.

Victor and Dylan are sharing information about Ian. Victor gives him money to pay Willa for whatever she has on Ian.

Tuesday– Victoria goes to Chelsea’s and they fight about Chelsea wanting to tell Billy Victoria is pregnant. Billy shows up.

Kevin is sending Chloe to a place in California to get help.

Jill goes to see Colin they discuss the terms of his release. Colin tricks her with a blank sheet saying it will help Jill find Katherine’s fortune. Jill gets angry and starts throwing stuff at Colin, in the process Katherine’s necklace falls from the chandelier.

Kevin is at home lying on the bed holding Chloe. Kevin tells her he has missed her and he kisses her.

Kevin and company say a tearful goodby to Chloe. As she is waiting for Esther to pick her up we see she still has Billy’s sperm in her purse.

Wednesday– Chelsea tells Billy he need to talk to Victoria.

Nick and Sharon are at the cemetery, it’s the anniversary of Cassie’s death. Visitor shows up and Nick becomes angry. Victor lays down his flowers and leaves. Sharon says that Victor brought the perfect flowers forget me nots.

Stitch and Victoria discuss whether or not she should tells Billy she is pregnant. Victoria decides to keep it a secret until the paternity test comes in.

Cane and Victor are discussing just how much hot water Victor may be in for the Bonaventure.

Billy tells Chelsea he talked to Victoria. Chelsea tells him everything will be okay once she has the baby. Billy ask Chelsea what baby.

Chelsea tires to pull her foot out of her mouth after slipping about the baby. Billy tells her to spit it out. Chelsea finally tells him about Victoria being pregnant. Victoria calls and Billy leaves.

Sharon is at home looking at the traffic ticket again. Sharon looks up the date and sees it’s the same day Phyllis’s accident.

Neil is holding hands with Hilary in the park.

Billy shows up with flowers for Victoria and tells her he knows the baby will be theirs. Victoria isn’t sure and ask how he is going to feel if it ends up being Ben’s.

Tyler tells Sharon about Mariah and later when Nick comes back she tells him she is going to Portland to help her.

Friday– Victoria wants to know if Billy would be ok if the baby was Ben’s. Victor stops by and when he finds out she is pregnant he offers to let her stay at the ranch.

Tyler and Abby once again fight over Mariah. Tyler tells her he is through with her. Abby doesn’t believe him and gives her engagement ring back.

Nick and Sharon also argue over Mariah. Nick finally gives in though and all is well.

Kevin lets Chelsea know Chloe is at the place in California.
Billy is doing a search on Stitch through the police database.