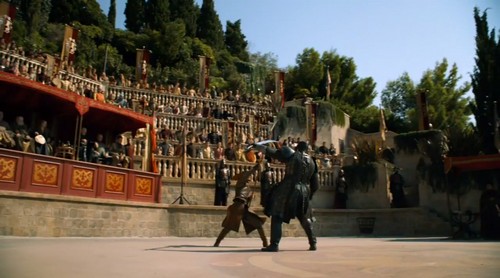 Did you miss the most recent episode of Game of Thrones — Game of Thrones season 4 episode 8 “The Mountain and The Viper?” If so, don’t worry! We have a great review for you here.

Gilly is at the Rains of Castamere you know the tavern that doubles as a whore house. One of the the ladies of the night threatens to kill Gilly’s baby if she doesn’t get the child to be quiet. Gilly hears something outside and tells the woman. The woman tells her it’s just a owl, Gilly however having had some experience in this area knows that it is in fact the Wildings coming. Sure enough that is exactly who it is. They are killing some people here, destroying and looting some buildings here. Ygritte walsk in to the tavern and sees Gilly. Ygritte decides to let Gilly get away and says nothing about her existence.

Sam is with the Night Watch and fears that Gilly was murdered. Jon Snow reminds his men that if they attacked Moletown then they are a stones throw away from them. The Night Watch becomes concerned with their odds against one hundred thousand men.

Daenery’s help Missandei is quite upset because she has been being checked out while she bathes by Grey Worm. Daenery tells her she has no need to fret over because as it turns out Grey Worm has no balls literally not figuratively, which means he cannot be interested in her lady parts. Missandei tells Daenery with or without balls she knows a interested man when’s she sees him and Grey Worn was definitely interested.

Ramsay Snow meanwhile is talking to Reek about Kracken and how stupid they are. Ramsay then reminds Reek that he is Theon but just for pretend. Reek sends Theon to
The castle carrying a white flag. Theon tells the guard that he is Baleon’s third son and therefore the prince of this here castle. The guard spits at him and then he is taken out with a sword. Theon ask the remaining men to surrender. They agree when Theon promises them they can live. Ramsay however has other plans and kills every last one of them. Ramsay then informs Theon the castle is their new home.

Lord Baelish meets with the tribunal and seems quite surprised that Lysa has gone and fallen through the Moon Door. They bring in Sansa for questioning. Sansa tells the tribunal she is not the Lord’s niece she is in fact Sansa Stark and that The Lord has been protecting her. Sansa then tells them how Lysa was mad as a hatter and that The Lord was going to drop her like a bad habit. Sansa brings up how jealous Lysa was and that whenshe saw The Lord give Sansa a harmless kiss in the cheek she went eight shades of crazy and flung herself through the Moon Door. The tribunal decides that Robert should be the new King.

Barristan Selmy finds out that Jorah has been spying in Daenery’s . Jorah goes and tells Daenery’s himself. Daenery banishes Jorah from her city telling him he has until dusk to get out Meereen.

Roose Bolton is so proud of Ramsay that he gives him his last name.

Peter pays Sansa a visit in her room to ask her why she did him a solid. Sansa apparently did it for self serving reasons if they had executed Peter she has no idea what would become of her.

The Hound is listening as Arya voices her disappointment over the fact that she didn’t get to see Joffery go into the good night. Arya tells him she would have done Joffery in with a chicken bone. After Arya gets to The Erie she finds out the Aunt she was coming to visit has also taken the big sleep. Arya starts laughing hysterically.

Jaime is waiting with Tyrion for the battle to begin. Tyrion does not think Oberyn can beat Ser Gregor. For whom the bell tolls? That would be Tyrion so Jaime heads out. Tyrion is taken outside to where the battle will be lost and won. Oberyn is just drinking away much to Tyrion’s dismay.

Once the battle begins the drunk decides to be a show off. Oberyn tells Gregor that he is the brother of the woman he raped and then killed. Oberyn demands that Gregor admit to it. Oberyn is accusing Gregor as he stabs him. Oberyn then does the stupidest thing he could possibly could, instead of finishing the mammoth off he takes the sword out and tries to get him to confess one last time. Oberyn then decides now is the perfect time to take a victory lap and begins prancing around him. Gregor grabs Oberyn and throws himself on top of him. Gregor then does this ewwww inspiring thing where he makes Oberyn’s eyes pop out of his head. Gregor then grabs Oberyn’s head with both hands and admits he killed his sister right before he squeezes his head till it goes away, like I said ewwww inspiring.

Tywin Lannister looking a little too pleased stand and says “The Gods have spoken. Tyrion Lannister you are guilty and sentenced to death.” This is not good.

If you want to know what is going to happen in next week’s penultimate episode our sister site, Celeb Dirty Laundry published juicy spoilers and a sneak peek video.