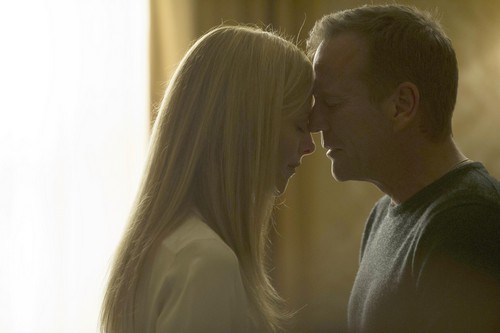 Here is our review of 24: Live Another Day episode 6,“Day 9: 4:00 PM-5:00 PM.”  4:00 PM-in the wreckage of the house the drone destroyed. Navarro staggers up hauling Ritter along. Heller finds out about the ambition but can’t get a total on how many were killed just yet. Davies is sorry but he is more worries about the drones headed to London. Heller tells Audrey to tell the secret service to bring him Jack.

Heller wants Jack to give up his connection to Margot. Jack says they don’t have enough time to get him and the info before the drones would hit London. Heller agrees to let Jack be the one to get what they need.

Heller gets Navarro on the phone and tells him Jack is going to help get Margot and whatever Jack wants Jack gets. Jack has quite the lost to, he wants a clean cell, a interrogation kit, a car, oh yeah and Kate to. Navarro says no can do on the Kate demand. Heller reminds him that Jack gets whatever he bloody well wants. Navarro agrees and Jack tells him thank you.

Jordan tells Kate that she is now working on team Jack since Jack asked for her.
Jordan has a chopper waiting.

4:10 PM- Margot’s son is concerned about Simone watching her kill Naveed. Margot goes to check in Simone who is watching them tag and bag her husband. Naveed’s phone rings and it’s his sister. Margot thinks she may know what’s going on and sends Simone to check it out. Margot tells Simone if his sister knows what Naveed was doing she will have to take care of her.

4:14 PM- Jack is loading his gun when Mark comes in to fret about the conversation Jack had with Audrey. Jack tries to ease his fears by telling him he probably won’t make through the day alive and even if he does he is headed to prison in Russia. Jack tells him Audrey said she was happy with Mark which is complete BS. Jack calls Chloe on his brand new phone and Jack tells her that he needs her and Belchek. Chloe puts Jack on speaker phone.

Heller calls Davies and tells him that Jack will now be helping them. Davies says Jack is not trustworthy. Heller tells him Jack is the only one who can get to who the need. Heller wants Davies to give him one hour. Davies agrees. After they hang up Davies tells his assistant to call MI5 and find where Jack is going and who plans on seeing.

Kate is met by Jack who explains he knows Karl Rask because he has been working for him for over two years. Jack tells Kate to hop in his car, she does. Jack calls Chloe. Chloe tells Jack she has all the information on Rask and all they need to do is get him to log in from the account they set up on his phone and they can track him.

Mark upsets Audrey by telling her he had his own little conversation with Jack and it was about her.

Mark tells the Russian Foreign Minister that they no longer will be handing Jack over to them. The guy wants a meeting. Mark agrees.

4:25 PM- Jack tells Kate he plans on handing her over to Rask as means to trick him. Kate tells Jack Rask will want to question her but can’t if she is knocked out. Jack has it covered and has a shot of propofol to give her. Jack lets Kate know that even though the odds are they are both going to die he will still protect her as much as he can. Jack puts the injection in her neck.

4:29 PM- Simone is with Naveed sister and daughter. Simone questions her but his sister seems to know nothing.

4:35 PM- Chloe and Belchek are watching from the other side of the street. Chloe reminds him he only gets one shot. Belches watches as they tie Kate up and inject her. Belches tells Chloe Kate doesn’t have much time.

4:39 PM- Simone calls and tells her mother that Naveed’s sister doesn’t know anything. Margot seems to think the sister is lying. Simone tells her that her daughter is with her. Margot tells her she has two problems to get rid of.

4:41 PM- Kate is slapped awake. Kate is hung up by a chain attached to the ceiling. Her arms are stretched out behind her. A bag of tools are brought in and a guy takes out a knife. The guy ask Kate a question and when she doesn’t answer he slices her thigh. Kate answers him but he thinks she is lying and covers her in water and the electrocutes her. Kate screams out in pain.

Belchek knows Jack need to hurry. Chloe tries to look up some info Jack need a to answer a question but the information is locked.

Rask puts a gun at Jack’s head and ask him if merger set up the account at the bank for him. Jack says there isn’t a Metzger. Rask calls him a liar and ask him again about Metzger. Jack wants again insist there is no Metzger and then ask Rask if he wants his money, Rask admits Jack is telling the truth. Jack gives him the account number and password. Rask has his guys check it out for him.
4:46 PM- Meanwhile Kate is about to get friendly with a drill. Belcheck knows he has to take the guy out or Kate will die. Someone from MI5 takes out Belcheck. Jack and Rask are all that matters.

Kate is still face to face with a drill.

Rask is about to hit enter but then MI5 bust in.

The guy with the drill stops cold when he hears the gunfire downstairs and then he takes off running. Kate grabs the other guy with her legs and chokes him out. Kate manages to get loose and stabs the guy with the knife.

While Rask and company exchange gunfire with MI5 Jack gets in the laptop and hits enter. Chloe tells Jack she has what she needs.

Kate is stuck upstairs. Kate collapses. Jack orders Rask to out down his gun and get on his knees, MI5 comes in and Jack tells,them he is working for Heller. MI5 grab Jack. They try to get Rask but he sets off a grenade killing himself.

Jack lets Chloe know he is a okay and ask her why MI5 is there. Jack tells Chloe to look back thirty days and see if she can find anything on Margot. Chloe finds a number and tells Jack she will narrow it down.

Simone is trying to convince Naveed’s sister to get her daughter and leave London ASAP. When his sister sees the knife in Simone’s hand she starts screaming. Simone kills her. Her daughter saw everything and takes off running. Simone foes after her and is so distracted at hand she follows the little girl into the traffic. Simone ends up getting hit by a bus. Simone had the phone Chloe was tracking. But when she gets hit the tracking stops.

Navarro is told by someone that they can retrieve the missing files but if they do the CIA will find out Kate’s husband Adam was set up.