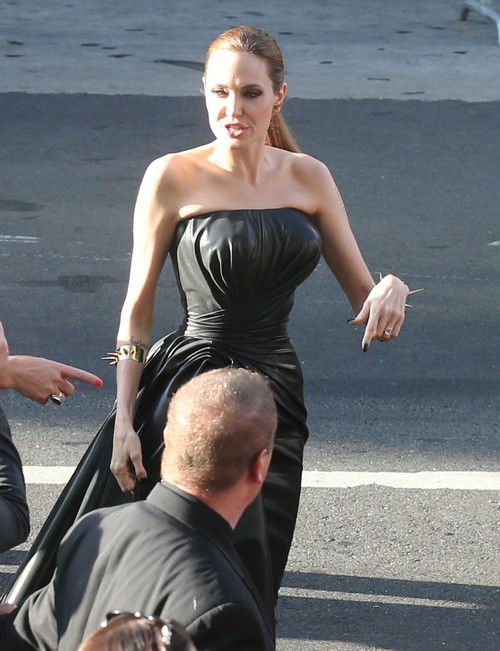 Angelina Jolie has been hinting at her retirement from the acting community for quite some time now, but it looks like we may get that day sooner than we anticipated. Angelina has been giving interview after interview during promotion for her latest film, Maleficent, where she appears in front of the camera after a two year break from acting. She’s definitely slowed down her acting career over the recent years, admitting that she much prefers directing to acting.

In fact, Angelina even hinted in a recent interview that after doing a long gestating Cleopatra project, she may finally hang up the acting hat for good. First, she touches upon the possibility of the Cleopatra project coming to fruition, explaining, “She’s [Cleopatra] complicated. It’s complicated to get this one right. I think we’re getting there. It’s getting close. I imagine the preparation for it is going to be big.” Well, that’s without a doubt. With Angelina involved and a big period setting, I don’t see the budget coming in anywhere under a $100 million.But Angelina also added that it’s likely that she’ll quit acting completely after Cleopatra, saying, “It’s one of those that you think maybe that’s the one you put everything into and that’s where you end it, that’s where you finish – in a great way. What could you do beyond that one?” Again, there’s no guarantee that she will quit, especially if Cleopatra is a critical and financial failure. However, if it ends up being a success and Angelina gets her second acting Oscar, she will no doubt want to go out on top – and this would be the perfect way to do it.

Plus, we really do need more female directors in Hollywood, and if Angelina’s clout allows her to produce and direct movies, then we’re all the better for it.