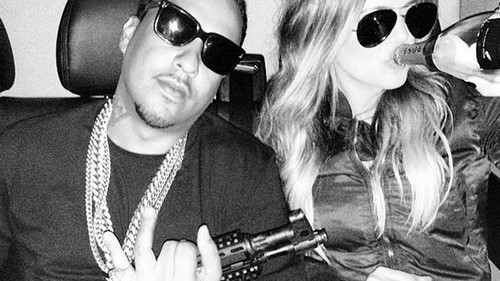 Uh-oh. Khloe Kardashian seriously needs some PR help if she thinks that posing with alcohol and guns on social media is acceptable. Alcohol, maybe we can let go. She’s an adult and a reality star, after all. But guns? Seriously??

Of course, her latest boyfriend, French Montana, is clearly a terrible influence on her. Khloe shared a photo of her and French, posing with booze and holding a machine gun, on Instagram. Yeah, not a rifle, not a handgun, but a MACHINE GUN. She captioned the photo, “About to go gucci maaannnnnn. #MovieSet #JustDifferent @frenchmontana.” French also shared the photo, but he captioned his with, “#bangbang.”

Yeah, Khloe Kardashian is an idiot. If you didn’t think it before, this should be proof enough now. First of all, this picture literally comes on the heels of yet another mass shooting that has rocked the country to its core, thanks to a misogynistic and disturbed youngster by the name of Elliot Rodger. He opened fire on several students on the University of California Santa Barbara campus, reigniting the debate on the use and access of firearms across the country.

And here French and Khloe are, posing with a freaking machine gun as if it’s no big deal. First of all, the fact that they would pose with a MACHINE gun is extremely insensitive, not to mention completely idiotic. Khloe has to know that she has extremely young fans, and drinking and showing off guns on her Instagram is setting a horrible example for them. Also, even if the gun is fake [which is what some people are saying], the fact that they would choose to pose with a machine gun and not something smaller says a lot about them. They were clearly trying to be ‘cool’, but instead come off as moronic and crass. It’s only been a week since the shootings, and they clearly don’t give a damn.