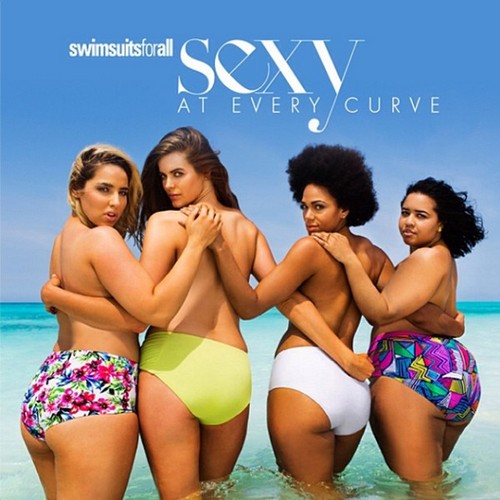 Yay for equality among body shapes. There’s this ridiculous propaganda in the modeling industry that allows only stick-thin size 0-2 figures to make it big, even though we have the rare exceptions where ‘plus-sized models’ [i.e. normal sized in the regular world] break through and make a name for themselves. In criticism of this, a group of plus-sized models got together and recreated the annual swimsuit issue from Sports Illustrated – you know, the one where they had all those skinny supermodels bear their butts in barely-there underwear?

The original SI cover featured Nina Agdal, Lily Aldridge, and Chrissy Teigen posing topless and wearing tiny bikini bottoms. When released in February, the cover got plenty of criticism for being hyper-sexualized, but it’s a Swimsuit issue from Sports Illustrated – what were people expecting? However, this new version [courtesy of Swimsuit for All] is great counter-programming to that, and shows young girls that they don’t need to look like those skinny models nor do they need to wear tiny underwear to be appealing.

This new cover features plus-sized models Jada Sezer, Shareefa J, Robyn Lawley, and fashion blogger Gabi Gregg, also topless and wearing only underwear – except this time, the underwear actually covers most of their behind. The photo was reportedly shot on the beaches of Turks and Caicos, and will appear in Swimsuit For All’s new swimsuit calendar. The goal of this shoot was to, “promote confident, sexy women with varying body types and prove that sexy curves go beyond a size four.”

Gabi, the blogger, also stated in the behind-the-scenes footage, “I think it’s sad that the representatives of women in mainstream culture are usually so small just because we have such a diversity of sizes in the real world. What happens is, I think, so many women see those girls and think they have to look like them. And I know plus-size models and bloggers, like myself, are really helping change that.”

Amen to that. Seriously, why don’t we have more people doing stuff like this? Especially in the fashion and modeling industry, where most women look like they’re about to keel over if they don’t get a sandwich.