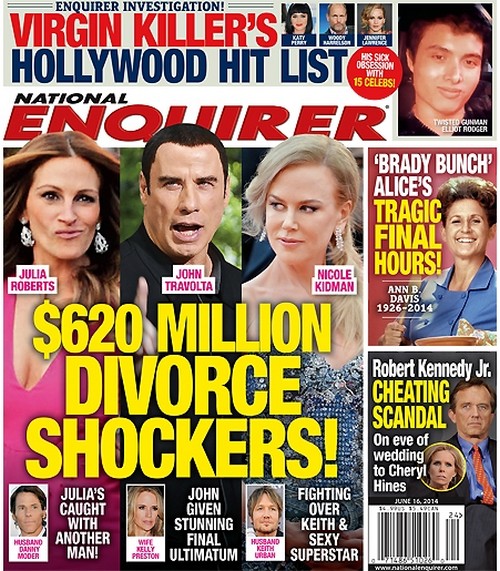 I have to almost feel sorry for Nicole Kidman because so far this really hasn’t been her year. First she portrayed Princess Grace in Grace of Monaco- a film so bad that even producer Harvey Weinstein is trying to block its’ U.S. Release. Now we’re hearing that her 7 year marriage to Keith Urban has totally hit the skids. Nicole was expecting to earn rave reviews for her film and was stunned when she ended up flying home to Australia with her career on shaky ground. The only thing that she probably expected less was for her relationship with Keith to become equally shaky. As his career has skyrocketed, Keith is thought to have been one of the few bright spots for the past two seasons of American Idol, he has been dividing his time between Australia and L.A. Leaving Nicole to feel like a single mother. According to the June 16th print edition of The National Enquirer the couple has been fighting like crazy and Nicole’s jealousy is really to blame. Insiders aren’t sure how much longer Nicole and Keith will even choose to try and fix their marriage and divorce is starting to feel like a better option.

Speaking of messy splits, it looks like Julia Robert’s may find herself knee deep in one pretty soon. After months of rumors swirling that the actress’ bullying helped to contribute to her step-sister, Nancy Motes deciding to take her own life, it seems that even her husband is seeing Julia in a different light.  Danny Moder has felt bullied by her for years but seeing how far his wife’s behavior pushed another human being is making him reconsider whether or not he wants to remain in the marriage.

Why hasn’t Kelly Preston kicked John Travolta to the curb yet? I mean, how many men does he have to be caught with- or sued by before she pulls the plug? Well, according to the National Enquirer rather than leave, Kelly has issued yet another ultimatum to her disloyal husband. Which of these three couples do you think will actually split first? Tell us your thoughts in the comments below!