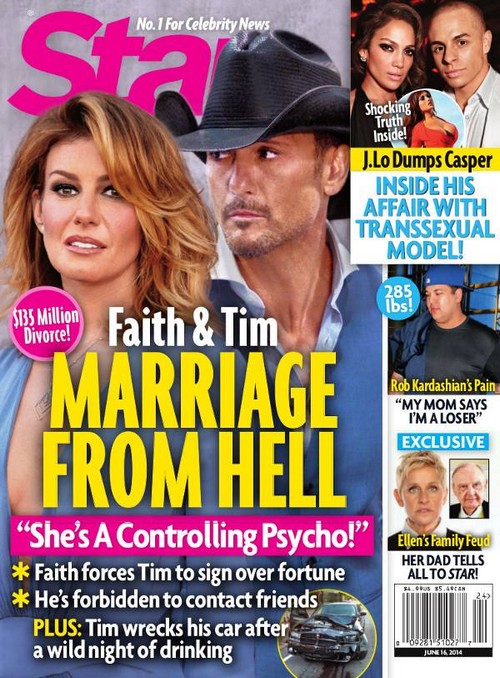 Faith Hill and Tim McGraw are one of those couples that will catch some scandalous headlines and then disappear out of sight for awhile. We have heard that their marriage has been in trouble for quite awhile now but it’s starting to sound like those rumors are snowballing into a serious marital meltdown.  Last fall Faith was said to be extremely jealous of Tim’s relationship with Taylor Swift. The two had worked together on a song and apparently the chemistry between them was palpable. He has been caught cheating on Faith before so her spidey senses seemed to be tingling with what felt like some familiar bad patterns.Fast forward 6 months and according to the June 16th print edition of Star Magazine Faith has tightened the reigns on Tim to the point that it has all but broken the marriage completely. She controls who he talks to and also handles the money to make sure that nothing is being funneled away for a side chick. Instead of keeping her man in line she is once again chasing him away by her controlling behavior and divorce is starting to look awfully appealing to Tim.

Jennifer Lopez doesn’t like looking like a fool and it seems that her boy toy of three years, Casper Smart has made her look like an absolute idiot. Not one but two transsexual models have publicly carried on a flirtation with Casper and we’re hearing that Jen has kicked him to the curb. Star Magazine also has the latest on Rob Kardashian’s issues with his fame hungry family. Rumor has it that Rob is this close to dishing all of the dirt on the family that he has never really fit in to. Would you buy a tell-all book written by Rob? Tell us in the comments below!