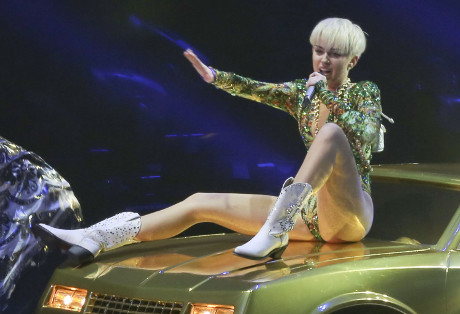 According to a new report from Life & Style magazine, Miley Cyrus is ‘obsessed’ with winning Liam Hemsworth back. It may have been months [and even years] since the couple was last happy together, but that hasn’t stopped Miley from pining after her ex-fiance. And even though it’s been over a year since they officially broke up, it reportedly wasn’t Miley’s choice to call off the engagement.

Although Liam’s already moved on by rebounding with several starlets [Eiza Gonzalez and Nina Dobrev, just to name a few], Miley has yet to find a steady relationship to replace Liam in her heart. I mean, they were engaged for three years and together for five years, and clearly Miley was still hung up on Liam. But what she was she to do, beg him not to leave her? Of course not. The girl has her pride, after all.

That being said, Life & Style‘s sources claim that Miley is still hung up on Liam, explaining, “She constantly talks about Liam whenever she’s hanging out with her friends. They could go to a club together and she would randomly say, ‘This party would be so much more fun if Liam was here.'” Apparently, she’s willing to do anything to win him back, even if it means stopping her wild-child antics in the press.

Aww, this is a little sad, isn’t it? Liam was the one who allegedly cheated on Miley with January Jones [and possibly a plethora of other women], and yet she’s the one who’s still hung up on him. Granted, it was Liam who called off the engagement and who pushed for the split, which probably left Miley in an extremely vulnerable emotional place. She hasn’t risked a rebound relationship with anyone, and you can’t really blame her for that. She really got her heart broken with Liam, and it’s unfortunate that she wants to get back together with him.