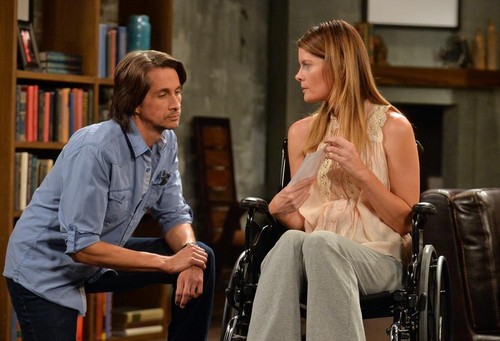 What follows is the recap and review for General Hospital week of June 2nd – June 6th.

Monday- Nikolas hands Liz the newspaper with General Hospital the story about Ric in it. Loz tells Nikolas it’s all bs. Nikolas just wants to sway her in his favor by proving Ric is the bad guy. Liz then begins to doubt herself and begins to think Ric lied to her. Nikolas hugs her.

Silas tells Sam that meeting her has freed him from his past. Silas admits that he loves Sam. Sam tells Silas she loves him to. They head upstairs. After Silas leaves Sam gets a visitor.

Lucas wakes up to Julian standing by his bed. Julian tells Lucas he is safe. When Felix comes in to check hisbandages Julian leaves. He runs into Bobbie in the hallway and almost lets it slip that “Luke” is his boss.

Brad shows up and starts talking about the wedding he went to. Britt stops him cold when she informs him Lucas was shot in his absence. Brad takes off to Lucas’s room. Felix is still in there and Brad ask if they are seeing each other. Felix tells Brad they he and Lucas have been dating. They get in argument and Bobbie kicks them out.

Nathan talks to patrick and Sabrina about the hit and run again. When he does with them he heads over to Britt and tells her that Madeline claims that Nina is still alive and he is unsure if he should tell Silas or not.

While patrick and Sabrina are visiting with Gabriel his machines go off. Britt runs in with a bunch if nurses.

Nathan runs into Silas and begins to tell him there is something he needs to know.

Alexis lets Molly know Lucas’s shooter has been caught. The problem is it’s her father. Molly demands that Alexis help Ric. When Alexis refuses Molly becomes upset that Alexis and no problem helping her other daughters fathers and she takes off.

Julian arrives to pick up Alexis for Danny’s birthday party and when Alexis tells him what happened with Molly he hugs her and tells her he is sorry.

Tuesday- Molly demands that Julian admit he lying about Ric. Jukian stands by what he said. Molly is confident he is lying. Moly wants to head to the police station but Alexis convinces her to go to Danny’s party instead.

Franco upsets Kiki while drawing a picture of her by telling her that her mother might be dead.
Sabrina is begging Britt to save her baby’s life. When Britt comes out she tells Sabrina and patrick that their sons organs are shutting down and he will be dead in a few hours. Sabrina cries that she isn’t strong enough to handle it. Patrick takes her hand and tells her they will do it together.

Sonny takes Ava to the hospital to find out if she is in fact pregnant. Are there like no other doctors other than ones in the hospital in this town or what?

A cop and Rafe are at Sam’s door when she opens it. The cop tells Sam Rafe was caught stealing but no charges are being pressed. Sam wants to discuss this after Danny’s party. Rafe decides not to go because Molly will be there with TJ. After Silas grabs Danny’s gift and heads out Rafe comes downstairs and takes out some cocaine and puts it on the table.

Silas arrives at the party and is stunned when he sees Danny with Nina.

Wednesday- More Ava/ Morgan/ Sonny drama. Sonny is upset he can’t kill her just yet. Morgan wants Ava to get a abortion and she says no way.

Felix and Epiphany are their to support Patrick and Sabrina. Sabrina breaks down as she holds her little one close. Sabrina tells him she is sorry she couldn’t protect him. Patrick is holding Sabrina the whole time. Sabrina informs them she wants her son to be baptized. Patrick goes with Epiphany to find the Priest. Epiphany promises patrick she is going to help him get through this.

The Priest comes and baptized Gabriel. Felix leaves and then comes back with Sabrina’s stethoscope so she can her sons tiny heartbeat. Sabrina smiles as she listens to it she tells him goodbye as his heart slowly stops beating.

Nathan is at the courthouse when Maxie arrives to try and reschedule her court date about her daughter. Maxie is alone and Nathan tells her he will come with her. Diane pleads Maxie’s case and then Nathan takes the blame for Maxie not showing up because he forgot to deliver the papers. The judge reschedules. Maxie tells Nathan that she owes him and Nathan tells her he will think of something. Diane tells Maxie that Nathan is a keeper.

Mac shows up at Maxie’s and gets into with Levi because dude is a self involved ass. For whatever reason Levi brings up Felicia’s Aztec background. Levi tells Mac he wants them to get along. Mac agrees to it but only for Maxie’s sake.

Nina is happy to see Silas and tells him she is back. Nina wants Silas to take her home. Sam tells Silas to go ahead and go with Nina. Alexis and Julian try to help Sam the best they can.

Thursday- Morgan makes it clear to Sonny that the two of them are finished.
Ava threatens to kill Carly and before Carly can slap her Sonny stops her. Sonny
tells Ava she is staying at his home with him.

Sabrina and Patrick are holding each other and their little boy. Sabrina tells her son how much she loves him. Liz and Felix come to get him. Sabrina breaks down and Patrick promises her they will get through it. Sabrina wants Felix to take her home. Sabrina tells Patrick that she is sorry. Patrick grabs her face in his hands and tells Sabrina to just remember the time they had with their little boy. When Sabrina is gone Patrick breaks down. Liz is also crying as she tells Patrick that Gabriel’s will always be in his heart and in his memories. Liz has a bag and in is the stuffed animal Emma bought the baby. Patrick breaks down as he has no idea how he will tell Emma. Liz says she will be there to help him.

Sam worries that Silas will decide that right thing for him is to be with Nina.

Silas arrives back at home with Nina who is ecstatic and looking forward to a future with Silas. Silas thinks he should sleep on the couch for the time being and Nina agrees that it’s for the best. Nina says she will see him tomorrow.

When Felix and Sabrina get home they are greeted by all the baby stuff she bought. Felix rushes to pick it all up but Sabrina stops him and says she wants to remember what it felt like Beiderbecke all this happened. Sabrina tells Felix she wants to be alone. Felix kisses her on the head and goes to his room. Sabrina looks around at all the baby stuff and cries.

Friday- Franco is drawing pictures in the park when Olivia shows up and takes all the money he has made to pay for the damages he caused at the Metro Court. Carly shows up and ask him to move in with her.

Morgan tells Kiki about her mother being pregnant and not knowing whether it’s his or Sonny’s. Kiki feels sick. She isn’t sure if she can forgive her mother.

Levi ask Maxie if something is going on between her and Nathan. Maxie tells him there isn’t.

Silas is on the phone with Sam and tells her he needs to tell Nina about them. Before he gets a chance Rafe comes in and Silas explains about him. After Rafe leaves Kiki shows up and he has to explain about Kiki being his daughter. Suffice to say Silas never gets around to telling Nina about his relationship with Sam.

Sam runs into Nathan at Kelly’s and confirms that Nina is in fact alive and well.

Max brings Ava into Sonny’s living room and Sonny tells her she is moving in with him. Max is going to be with her until the baby is born and then Sonny is going to kill her. He sends max with Ava to get her things.

Sonny almost has Olivia convinced they can work things out but then Ava shows up and ruins everything by telling Olivia that she is pregnant and moving in with Sonny.

Morgan shows up and is confused when he sees Ava moving in to his dads.