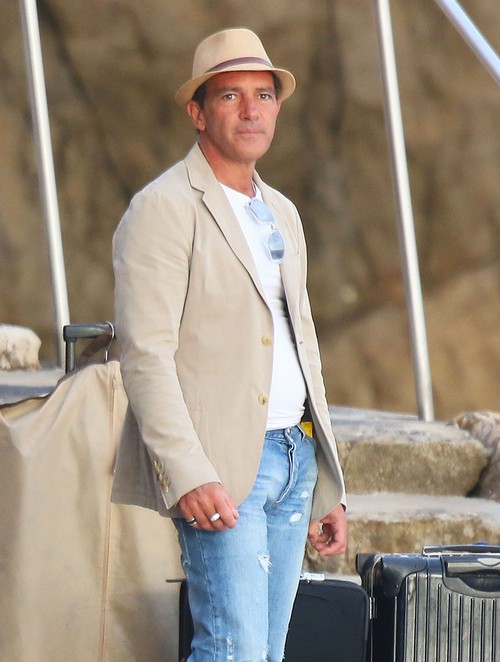 Melanie Griffith and Antonio Banderas have been married for 18 years, but I guess that no longer means anything, especially in Hollywood. According to reports, Melanie has filed for divorce from Antonio, citing ‘irreconcilable differences‘. Don’t celebrity couples almost always cite that as the reason for the divorce? Obviously, there’s more going on behind-the-scenes because Melanie is reportedly asking for sole physical custody [plus joint legal custody] of the couple’s 17-year-old daughter, Stella. She’s also asking for child support, and honestly, it’s likely that she gets it.

It’s interesting that she would file for sole custody, because that implies that she doesn’t think that Antonio is fit to raise his own daughter. But she and Antonio stepped out together for the AFI Tribute to Jane Fonda on Thursday, so what happened within a day that would make her change her mind?Or perhaps the sole custody is an agreement that she and Antonio have together, and it’s something he wants as well? I have a hard time believing that he would give up physical custody rights to his own daughter, but there have been plenty of rumors that suggest that Antonio wouldn’t exactly be the best guy to raise a teenage daughter. For one, he’s apparently always having random hookups with other women, and even if Melanie knew about his affairs, it wouldn’t really be a good environment for his daughter. Secondly, Stella’s almost 18, which means she’ll head off to college soon enough – and in that scenario, the rights really don’t matter. No doubt, we’ll find out more as news of the divorce spreads and sources start speaking up.

This will be Melanie’s fourth divorce, and in addition to Antonio Banderas, she was also previously married to Steven Bauer and Don Johnson [whom she married twice].