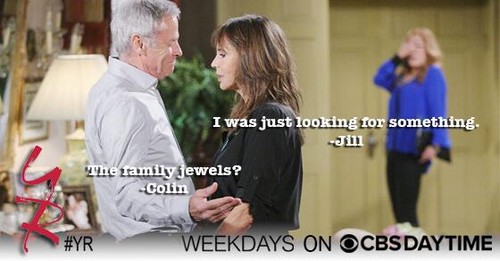 Monday-Avery sees Austin flirting with Summer and is not happy. Avery ask them what is going on. Leslie pops in and summer tells Austin she is the one who bailed Ian out. Avery tries to warn Summer from getting involved with Austin. Summer gets mad and angrily tells her that she isn’t her mother. Avery tells Leslie that Dylan thinks Ian is behind all her stalker like messages and has left to speak to Ian’s ex wife. After Leslie leaves Avery gets another message. 4MJ. Who are you?

Nick wants to go to Portland with Sharon but she tells him no. Nick heads to the gym. Sharon’s therapist makes a house call and it seems as if Sharon might be remembering something but it never comes. Sharon tells her therapist about Mariah and the therapist tells Sharon to be careful.

Jill and Colin find out that Katherine’s necklace is worth eighteen million dollars. Colin wants to sell it and Jill makes him sign a paper saying that neither one of them can unless the other one agrees to it. Colin being ever so sneaky immediately calls someone to steal it after Jill leaves with the signed paper.

Lily gets earrings from cane for her birthday made by her favorite French designer.

Nick gets into with Tyler about Abby.

Austin offers Summer a beer and ask her how old she is. She assures him she isn’t a child and decides she would like to prove by having him have sex with her. On Austin’s computer screen you can see by MJ. Knew it was him.

Nick comes home just in time to see Sharon leaving for Portland, Sharon promises Nick she will be strong.

Tuesday- Stitch calls and leaves Victoria a message. Billy comes out of nowhere and they argue back and forth about Victoria. Stitch tells Billy he won’t back down. Billy tells him the odds are in his favor when it comes to being the baby’s father.

Avery is stressing her latest message from 4MJ when Dylan calls. Avery tells him everything is fine and wants him to keep looking for Willa.

Austin realizes Summer is still a virgin and refuses to sleep with her. Austin then has her leave so he can do some editing. Austin sits down and pens a another message to Avery this time saying justice will be served.

Lily argues with Neil about Hilary when he brings her his birthday gift for her.

Devon gets hurt in the gym and Hilary says she will take him to the hospital.

Avery pays a visit to Ian and accuses him of being the one that is stalking her. Ian suggest it’s someone from her past.

Hilary calls Neil to tell him about Devon.

Summer runs into Avery and tells her if she wants to be with Austin she will.

Adam is watching Connor on his video surveillance. Victoria shows up and tells Chelsea she told Billy all about her being pregnant. Victoria tells Chelsea to stay away from Billy. Billy arrives and when Victoria ask him to walk her out he politely tells her no. Billy wants Chelsea to help him get Ben out of Victorias life. Chelsea suggest they look for his ex wife.

Adam gets pictUres of Chelsea and Connor from a man who assures him she doesn’t know she is being followed, that man tells Adam it’s won’t be long until he can see them in person.

Victoria session Ben while picking up her prenatal vitamins. When she ask him what he wanted he tells her he wants to give her whatever she needs.

Devon almost comes clean with Hilary about his feelings but Neil comes in. Devon leaves.

Wednesday- Nikki and Victor talk he wants her to come home. Nikki knows.

Kevin refuses to go to dinner with Michael. Kevin receives a email from Chloe telling him she cannot call him and that he is not allowed to visit her. Chloe goes on to day she doesn’t know if she will ever be coming back and that it is time for Kevin to move on. Kevin smashes his phone.

Colin and Jill are about to leave for dinner when Cane and Lily show up. Charlie needs to go to the hospital and the only person Mattie wants to stay with is Colin. Colin agrees. Soon Colin and Mattie are playing hide and seek.

Avery is in the park with Nick when she receives another message from 4MJ. Nick tells her to be careful.

Cane thinks they should leave the kids with Colin for the night. Lily gets upset and tells him they are getting. Charlie’s cream, picking up Mattie and then going home.

When they arrive to pick up Mattie she is still playing hide and seek. Colin gives her a kiss and they leave. Jill notices the necklace is missing and accuses Colin of taking it.

Thursday– Sharon returns home with Mariah in tow. Nick is quite upset about it. As usual they get in a fight and then they have sex. Nick offers to hire Mariah at the Underground. Sharon is excited. Nick is not.

Tyler ask Abby about why she ended their engagement. Abby refuses to marry him when he clearly still has feelings for Mariah. Abby doesn’t trust him. Mariah shows up. Mariah tells Abby she is sorry she ever interfered and to give Tyler another chance, Abby still won’t put her ring back on.

Jill is trying to get a cop to arrest Colin for stealing the necklace. Colin keeps saying he didn’t take it.

Neil wants Hilary to. I’ve in with him permanently. Hilary isn’t sure.After Neil and Lily have a chit chat Hilary decides she is ready to move in with him after all.

Colin goes to see the guy who was supposed to steal the necklace. The guy tells him he doesn’t have it because when he went to get it there was a cop car at the house. Colin wonders who took the necklace.

Mattie took the necklace and Lily takes her and has her return it, Colin wants Jill to apologize. Jill gives him a kiss.

Friday- Jack is back from London. Jack gives Kelly a kiss when he finds her at the club.

Nikki tells Victoria she needs to figure out how she fells about stitch and Billy before she finds out who the father is.

Chelsea hears a video chat that Stitch is having with ex and his son. When he leaves Chelsea calls Billy and tells him she has some information about Stitch for him.

Avery and Austin are working when Paul shoes up to discuss the report she filed about the messages she has been getting. Paul tells her that he can’t get the name of the person behind 4MJ released. Paul tells her it isn’t Ian’s style and it could be someone that has a grudge against her due to one of her cases.

Victor wants to know if Willa will give them what they need agaiNst Ian. Dylan tells him she disappeared overnight. Victor tells him he will get a P.I to find her. Dylan still wants to help Victor nail Ian.

Summer wants to go back to Avery’s with Austin he tells her no and them informs her he is leaving later that night. Austin tells her he will need everything he needs from Avery by then.

Chelsea lets Billy know she found out that Stitch’s ex wife’s last name is Kieran not Rayburn and that she lives in Melbourne. Chelsea already has her phone number. Chelsea tells Billy to call her. Billy calls but flubs it up. Chelsea tells him he has no choice but to go and see her. Billy ask Chelsea to go with him.

Paul ask Dylan about the message Avery has been getting. Dylan didn’t realize the cops were involved. When pUl leaves Dylan calls Avery and ask her why she didn’t tell him how scared she was. Paul meanwhile is making a call to try and find out who is sending the messages.

Austin shows up at Avery/ and teLls her they will be finishing the shoot at his place.