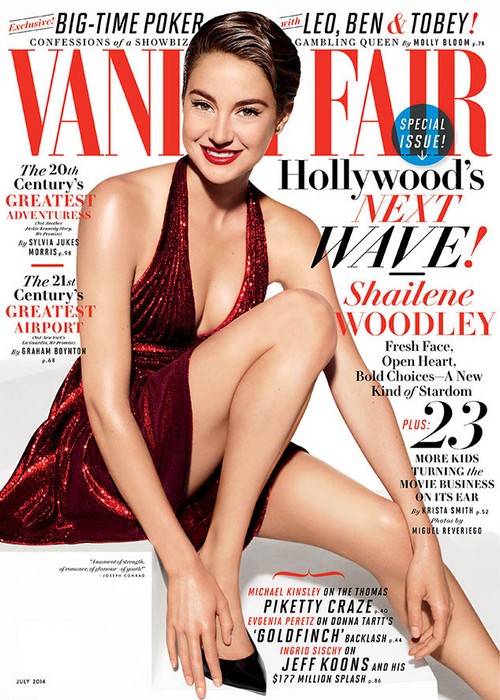 Shailene Woodley is on top of the world right now. Her new movie, The Fault In Our Stars, opened to #1 at the box office, handily beating Tom Cruise‘s Edge of Tomorrow and raking in a ton of cash and critical acclaim. Shailene covers the July issue of Vanity Fair Magazine, and in the accompanying interview, she touches upon her career and her disappointment at learning that she was cut from The Amazing Spider-Man 2.

Shailene was initially signed on to star in the series are Mary Jane Watson, Peter Parker’s romantic interest after Gwen Stacy’s death in TASM 2. She had a few brief scenes in TASM 2, but the bulk of her material was being saved for the third film. However, the filmmakers made the decision to axe Shailene’s character from TASM 2 and cut out her few scenes, claiming that the film was already too overloaded with supporting characters and multiple villains. They claimed they wanted to concentrate on the arc between Peter and Gwen, and introducing Mary Jane would only detract from that. They were all valid explanations, but imagine hearing that you’re fired without even doing anything wrong? Well, Shailene knows exactly what that feels like.

She tells Vanity Fair, “For a few hours it was literally like, ‘Oh, my God, was I awful? Why did they cut me? What are people going to think?’ I woke up the next morning and I was like, ‘O.K., it makes total sense.’ I’m a pretty spiritual person, so I can just sit back and trust that everything happens for a reason, even if my ego doesn’t like it.”

Good for her, right? I don’t think most actresses would have taken the news quite as well, especially if they refused to look at the bigger picture. It’s not clear whether Shailene will be returning for the role of Mary Jane in the third Amazing Spider-Man film, but she’s already signed up to film the Divergent sequels back-to-back, so I don’t know if the scheduling will work out.