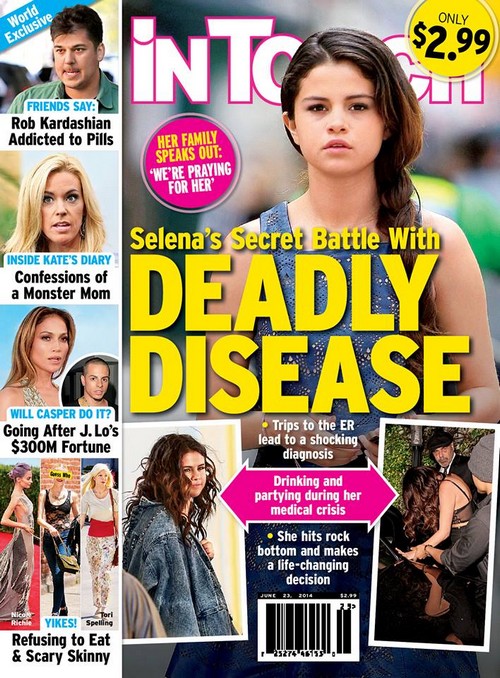 Kate Gosselin tried a few years ago to make that scandalous book written by Robert Hoffman disappear and it almost worked. The thing only saw the light of day for two days before a judge insisted the book be pulled from shelves but then she dropped the civil suit against him. Ultimately that allowed the book to be re-released and so of course, it’s back. The June 23rd print edition of In Touch magazine got it hands on exclusive excerpts and Kate is clearly depicted in her own words as nothing short of a monster. Remember the content for this book has been pulled from Kate’s own personal diary that was stolen from a family hard drive. In even this snippet Kate admits to beating her son Collin to the point that she feared hurting him. She also called then-hubby Jon Gosselin at work and told him that she was afraid she would kill his kids.

The new issue of In Touch also takes a close up look at Selena Gomez who is supposedly battling a serious illness. After months of partying to avoid reality and running with losers like Justin Bieber, Selena is supposedly now committed to getting herself healthy and back on a much better physical path.

Speaking of someone who needs help, Rob Kardashian has been spinning out of control for quite awhile now. Friends say that the unwilling Kardashian family member has developed a nasty pill addiction that is making everything in his life more difficult. Do you think that Rob will get himself together soon or does he still need to reach his bottom? Tell us your thoughts in the comments below!