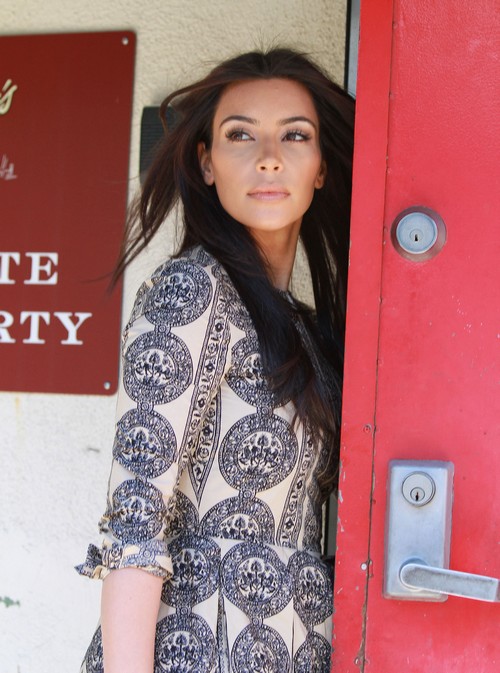 At the rate at which Kim Kardashian‘s going, her whole face will start to resemble a wax figure doll in ten years, but that might actually be her goal, so who knows? A new report from Star Magazine claims that Kim received yet another pre-wedding nose job, which will probably bring the grand total of her plastic surgery procedures above a dozen.

The report claims that Kim was ‘obsessed’ with getting Charlize Theron‘s nose, and underwent a top-secret 4 A.M. nose job to achieve this look. Yikes, talk about Kim single white femaling Charlize, no?

Anyway, Star’s source also claims, “Kim’s nose looks like it’s getting smaller and straighter, which can only be achieved by having surgery.” Apparently, Kanye West didn’t find out about the surgery, “until afterward, as he’s totally against plastic surgery, because of how his mother died. Yeezy may have married into the wrong family!”

Duh. As much as people make fun of Kanye [which is a lot!], he’s always worked hard to achieve his fame and his place in music. Kim, on the other hand, became famous off a sex tape and well-placed connections. It’s not even close to being the same thing, and the plastic surgery just makes it ten times worse.

Sure, Kanye’s clearly superficial, and he’s infatuated with Kim right now. But what will happen if Kim continues to mess with her face? There’s only so many procedures she can get before she’ll start to resemble a melted version of the crypt keeper, and there’s no way Kanye’s going to stay with her then, especially since the sole reason for their attraction was the physicality. I mean, it’s not like he’s in love with her for her humor or her intelligence, you know?

What do you guys think? Did Kim get plastic surgery to achieve a Charlize Theron-esque nose before her wedding? Let us know your thoughts in the comments below.