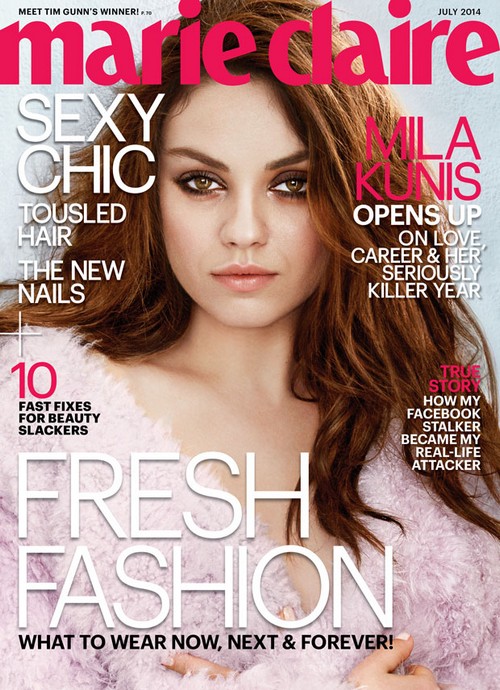 Mila Kunis has never been one to censor herself, but pregnancy has really removed any signs of a filter that she once had. In an interview with Marie Claire Magazine [to promote the now postponed Jupiter Ascending], Mila discussed her relationship with Ashton Kutcher and giving birth with him in the same room – and needless to say, things got a little TMI.

She stated, “Two people are allowed in my delivery room. My doctor and my significant other. And he is staying above the action. He’ll be head to head. Not head to vag. Unless he wants to risk his life and see. But I wouldn’t if I were him. I highly doubt he wants to see that being ripped apart and shredded. Because it will be shredded. It’s just a matter of how badly.”

Eeeeeeeh, talk about too much information. Nobody wants to hear about vaginas being shredded, and I doubt Ashton does either. But Mila’s comments on their relationship deviate in another direction, especially since she refused to comment on it at all in the past. She’s seemingly become much more open since the pregnancy, probably because there’s little point in hiding it when the whole world already knows about it. She claims that she and Ashton were always friends, and that it just ‘changed’ one day. She also adds that his proposal was the best day of her life, and that she cried.

I don’t know, I still find it odd that Mila and Ashton ended up together so quickly, especially since Mila was with Macaulay Culkin for so long without anything getting serious. But hey, I guess when it’s love, it’s love.