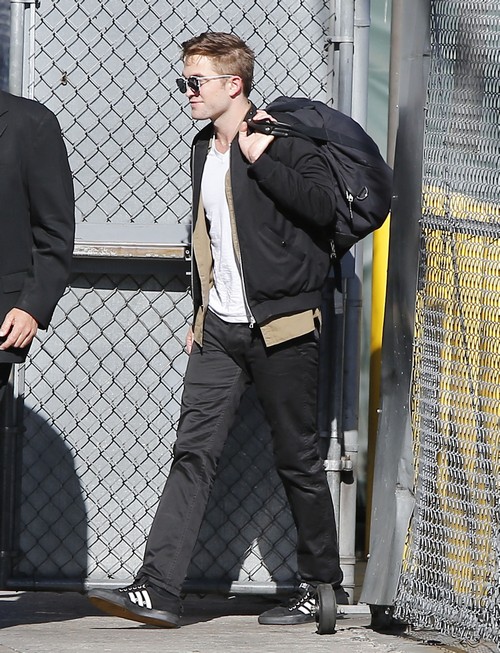 The more we hear from Robert Pattinson, the more I’m starting to think that he’s a pathological liar. For one, he’s constantly going on about how he has nowhere to live in Los Angeles, which is a bit hard to believe when you consider the amount of money he has.

Rob is currently promoting The Rover, and as part of his promotional tour, he was on Jimmy Kimmel Live. The last time he was on Jimmy’s show, Rob told people that he was living under an archway next to some trash cans, but this time, he’s changed his story to claim that he’s completely homeless.

He says that he did have a house that he was borrowing, but his parents borrowed it from him while he was in Toronto. He claims the house returned to its owners since then, and all of his stuff is in storage ‘somewhere’. See, how could he possibly not know where his own belongings are? I guess it’s possible that he has people that take care of all this stuff for him, which he jokingly calls his ‘minions’ in the interview.

However, I am more inclined to think that he does have a place to live, but he doesn’t want to admit it out of fear. Rob’s had plenty of experience with Twi-hard stalking and paparazzi chasing, and if he admits that he actually has a living place in the city, then no doubt everyone in the world will be trying to find out the location. This way, he can just pretend that he’s swinging through town and staying at hotels, and not be bothered as much by people googling ‘Robert Pattinson house’.

What do you guys think of Rob’s comments? Let us know your thoughts in the comments below.