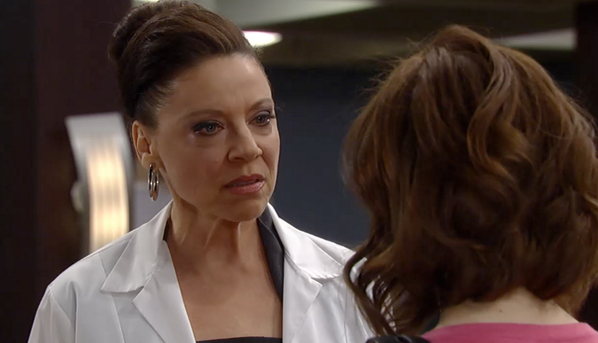 What follows is the recap and review for General Hospital week of June 9th – June 13th.  The big news this week in soaps is that it looks like Billy Miller just might have been cast as Jason Morgan.

Monday– Nathan is still processing what. Sam told him about Nina being at Danny’s birthday party.

“Luke” calls Julian from his honeymoon with Tracy to tell him he he thought he might have to out a bullet in Sam next. “Luke” tells Julian to get back to work.

Jordan is meeting with Anna about Ric. After Anna leaves Jordan puts in a call to TJ. Julian shows up and tells her their boss wants them to get back to work. Jordan is confused since Ric is in jail. Julian tells her Ric isn’t the boss.

Nathan shows up Silas’s to see Nina. Matcha explains it was Madeline who out her in the coma and caused her miscarriage. Nathan also explains they are not really brother and sister. Nina expresses regret for everything she has lost, but the one thing she won’t lose is Silas she will never let him go.

Morgan comes to get Ava at Sonny’s. When Morgan finds out she is going to love thEre
He decides he wants nothing to do with her and leaves. Ava becomes upset and says how much Morgan would hate her if he knew what she had done. Sonny offers her a phone to call and tell hIm. Ava thinks she will call Michael instead and tell him that Sonny killed AJ. Sonny calls her bluff.

Silas goes to see Sam and tells her he hasn’t told Nina about hem yet but Sam is the one he wants to be with.

Morgan goes to see Kiki and tells her about finding Ava moving in with Sonny. Kiki hugs Morgan.

Tuesday– Brad is whining to Britt about Felix and Lucas. Britt is to busy watching Nikolas and Liz hug to really pay attention. When Nikolas gets on the elevator Britt tries to talk to him and he blows her off.

Diane shows up to remind Liz they need to discuss Ric. Liz decides she ould ratHer noT say anything since there is evidence pointing directly at him. Diane tells Loz she is just repeating her earlier AJ mistake. Liz at this point agrees to talk to Diane.

Brad and Britt are still whining instead of being proactive.

Molly is with Alexis who is going down Ric’s lost of charges. Molly is sure her dad is innocent. Alexis disagrees. Molly takes off.
Sonny pays a visit to Ric and tells him he should have killed him we he had the chance. Ric tells Sonny he is in innocent and that Sonny has still got a target on his back. Sonny leaves.

Molly comes in next and tells her dad that she believes him.

Duke comes to see Anna and finds out she let Julian go in order to get Ric. Duke is angry she picked Ric over their relationship and takes off. Duke runs into Sonny on his way out and Sonny tells Duke he doubts that Ric is Julian’s boss.

Jordan demands that Julian tell her who she is really working for. Julian refuses and tells her to get back to work. When Julian leaves she calls Anna and tells her their is a problem. Jordan tells her about her meeting with Julian. Jordan has to stay undercover.

Anna pays Ric a visit in lock up.

Wednesday– Sabrina is writing Thank You card when Felix walks in. Felix is shocked to see what she is doing. Felix got her a dress to wear to the service. Sabrina hugs him and ask him to go and make sure the church looks perfect. Felix leaves rather reluctantly. Sabrina has a fit when she sees that Felix got her a black dress. Sabrina tells that it all wrong. Girl is having a mini breakdown.

Patrick is on the phone with his father telling him about the baby. When Sam comes by he tells her how hrs it was for him to tell Emma about her little brother dying. Sam offers to find out who ran them off the road. Patrick almost lets it slip about Jason. Felix comes by and tells Patrick something is very wrong with Sabrina.

Silas leaves Sam a message telling her he is going to tell Nina about then right now. When Nathan leaves. Nina stars talking about how holy she is to be with Silas and she kisses him. Silas breaks it off and tells Nina he has been seeing someone.

Rafe gets caught doing coke by TJ. They get in a fight and punch each other.

Sam runs into Rafe a little bit later she tells him she just saw Patrick and that his little boy died. Rafe is surprised.

Molly, Diane, and Liz are all at the PCPD. Liz tells Molly they are in it together. Diane ask Nathan if Liz can see Ric. Nathan heads off to arrange it.

Anna tells Ric that Julian set him up but she can’t let him go because of the evidence she has. If she gets rid of it Julian’s boss will find out and that puts more people in danger. Ric ask Anna to tell Molly and Liz the truth.

Nathan arrives later to take him to court. Ric is looking at Nathan’s gun.

Upstairs Anna is with Liz and Molly when they hear a gunshot.
Lulu and Dante find out from her doctor their is a possibility she can carry a baby. Dante thinks they should think about it for a little while.

Thursday- Silas tells Nina about him and Sam. Surprisingly she takes it well which bothers me for some reason. Nina tells Silas she will go stay with Nathan but Silas tells her that she is staying there.

At the PCPD everyone gets down while Anna rushes off. Molly and Liz both know it involves Ric. When Anna comes back she tells them that Ric is dead. They see a than with the bodybag. Anna has no choice but to put Nathan on administrative leave. Liz is trying to comfort Molly. Anna follows the bag to the morgue. When she is alone she unzips it and Ric opens his eyes.

Sam tells Rafe she will be looking into the bit and run case for Patrick.

Maxie is doing yoga with Levi. They discuss Patricks baby dying and Levi tells her that’s the way the universe planned it, this guy is such a ass. Maxie says that’s bs. Levi tells her Se sounds like Nathan and leaves. Speaking of Nathan Maxie finds him sitting alone on a park bench upset.

Friday– Duke goes to see Sonny who tells him all about Ava and his dilemma. Sonny tells Duke as soon as the baby is born, the truth dies with Ava.

Nathan ask Maxie to have a drink with him.

Britt is with Brad at the Floating Rb talking about Nikolas. His ears must have been ringing because he walks in. Britt is going to leave but Nikolas stops her and apologizes for being a jerk earlier. Britt knows Nikolas hates her. Nikolas tells her he doesn’t hate her. The news about Ric’s shooting comes on the TV and Nikolas goes to find Liz.

Maxie wants to know if Nathan really killed Ric. Nathan is about to tell her something but his ribs are delivered. Maxie tells him about the baby and her fight with Levi. Nathan is happy Maxie is listening to herself. Nathan shares his ribs with her.

Lucas finds Felix upset outside of GH. Felix tells him about Sabrina’s baby dying and how he feels that he needs to take care of her. Lucas ask him who,is going to,take are of him. They hug and Felix starts crying. Brad happens to,see this and starts yelling at them. Lucas shuts him up and sets him straight when he tells Brad about Sabrina’s baby. Felix walks off followed shortly by Lucas.

Molly wants to see her father. Molly begs and begs until Alexis gives in.

Anna lets Ric out of the bag. Anna reminds him he needs to continue to play dead in order to keep his family and Liz safe. Anna sees Alexis and Molly and tells them Molly can’t see Ric because the wounds are so bad. Molly sneaks by Anna. Alexis and Anna run after her. Ric manages to hide. Molly breaks down in tears. After that’s all over with and Alexis and Molly are gone. Anna gives Ric a disguise.

Obrecht sees Britt and wants to help her. Britt tells her to help her get Nikolas back.

Liz is outside with Nikolas when Molly and Alexis show up. They all hug.

Anna manages to sneak Ric out but he almost gets seen by Liz when she turns around.