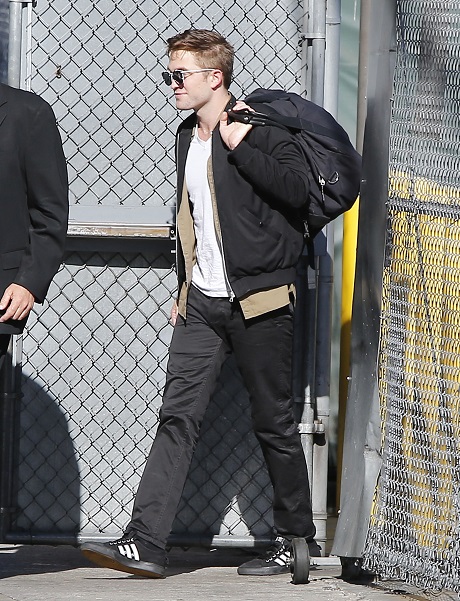 Robert Pattinson is trying to undo years of damage that Twilight has done to his career, and to be honest, he’s doing a pretty good job of it. Rob’s always been very self-deprecating about his career and his acting abilities, but he seems to have finally accepted that this industry comes with its own set of rules and complications. Rob’s seemed to find a niche in the industry that he’s comfortable with – i.e. indie dramas without much fiscal responsibility. He’s also getting the best reviews of his life for The Rover, so it’s obvious why he’s working so hard to promote it.

In several interviews, Rob’s been asked about the rumors of him playing Indiana Jones or a young Han Solo in a Star Wars spin-off film. First of all, I don’t understand these rumors – does Rob look like he could pull off a young Harrison Ford? By his own admission, Rob’s crippled with extreme anxiety and a lack of confidence as an actor, and confidence is a MUST in whoever ends up playing both Indy and Han.

But I guess Rob feels the same way about these rumors as the rest of the Internet – that they’re ridiculous. In a new MTV interview, Rob laughs off both the franchise rumors, and says that he never even met with J.J. Abrams about a potential Star Wars role.

He was also interviewed by the Daily Beast regarding rumors of him playing a young Indy, and he explained, “No. [Laughs] But I mean, I don’t know. That would be so funny if I suddenly got offered it. I’d be like, “Oh shit!”

Well, at least he’s covering all his bases. See, just because he doesn’t think he’ll land the role, doesn’t mean that some studio executive doesn’t have his name on the casting lists. But then again, Rob seems determined to believe his own bad press. He even said, “I think all of these things are made up so I get tons of bad press. Literally this random story comes out and I get 50 other stories saying, like, “THAT GUY? NOOOO! What an asshole!”

See again: self-deprecating humor. It really will serve him a lot in the coming years, especially if his confidence continues to build. Now, I don’t see Rob avoiding franchise films forever, especially if he wants to have a lasting career in Hollywood. He does admit that he’s willing to take on more franchise roles, but he would have to put a lot of thought into it first. Understandable, especially since he ended up losing his privacy and playing a sparkly vampire the last time he didn’t think things through.