The Young and The Restless Spoilers: Neil Shocks Devon and Lily By Proposing To Hilary On Father’s Day 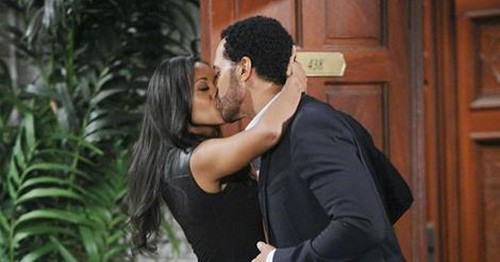 The Young and the Restless fans have been watching Neil and Hilary’s whirlwind romance develop over the course of the last few weeks, despite protests from Neil’s daughter Lily who despises his new girlfriend, and his son Devon who is obviously in love with his new girlfriend. According to The Young and the Restless spoilers, on June 12th Neil and Hilary take their quickly-paced relationship to the next level.

The June 16th edition of Soap Opera Digest teases that there will be a dramatic Father’s Day celebration on The Young and the Restless during the week of June 9th. According to the magazine, “Lily throws Cane a Father’s Day celebration at the G.C.A.C., to which Colin is surprisingly invited. Lily who is on the outs with her own dad because of his romance with Hilary, is caught off guard when Neil arrives, thanks to Cane.” SOD goes on to explain that Lily argues with Neil about Hilary, and throws in his face that his son Moses will be confused by their relationship. Lily’s plan backfires when Neil shocks everyone, including Hilary, by asking her to marry him.

There is no doubt that Lily will flip out when she finds out her Dad and Hilary are going to tie the knot, it’s safe to say that she will not be welcoming her new step-mother to the family with open arms. Sparks are sure to fly this summer as Lily ups the ante and tries to come between Neil and Hilary. Not to mention poor Devon, pining over your dad’s girlfriend is one thing, but obsessing over his wife is just a little bit creepy.

Are you shocked that Neil is going to propose to Hilary on The Young and the Restless? Do you think that he is making a huge mistake, or are you a fan of their relationship? What kind of crazy shenanigans is Lily going to pull to try and stop the wedding from happening? Share your thoughts and theories in the comment section below and don’t forget to check out our sister site, CDL tomorrow for more The Young and the Restless spoilers.