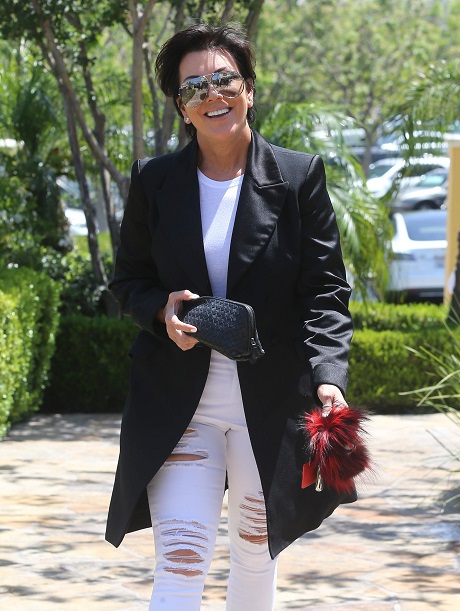 Uh-oh, is there trouble between the Kardashian matriarch and the newest addition to the family? According to reports, Kris Jenner and Kanye West are engaged in a little mini-feud, thanks to Kanye’s refusal to sell his wedding photos. Apparently, Kanye [and Kim Kardashian, with Kanye’s influence] turned down offers close to $11 million for their wedding photos. Obviously, all these offers were made by international buyers, since no magazine in their right mind would pay that much in the US, especially with the declining interest in the Kardashians. Anyway, Kim’s famewhoring and money-obsessed mother did not like Kanye’s decision, largely because she would have stood to make a quite a tidy sum if the pictures had sold.

A source even told Page Six, “These are Kim’s wedding pictures. Kim and Kanye were getting offers for money, and they decided with their teams not to take any.”

See, Kris still makes commission on all her of her children’s ‘business interests’, i.e. anything that they do that results in money. She’s got them wrapped around her finger, doesn’t she? This way, they’re forced to pay her money, even if she doesn’t do anything to help them get that money. This is why everyone calls Kris the best pimp mother in town. Nobody else could have pulled off what she did – brainwashing and famewhoring her own children, and then somehow convincing them that giving her their money was a good idea. And obviously, I can see why she feels she got shafted in this scenario. She worked so hard to make Kim famous, which she probably feels was the reason Kanye was ever interested in her in the first place. And now that they’re married, she’s not getting any money out of it!? Blasphemy!