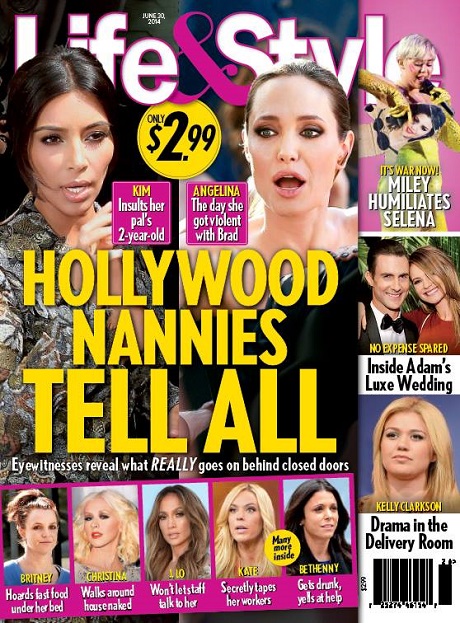 Kim Kardashian may want to start running right about now because I doubt even Kanye West with his God complex can protect her from the wrath of Beyonce. Good old Kimmie seems to have forgotten to watch her mouth around the help and now of course that help is talking.

According to the June 30th print edition of Life & Style Magazine, Kim’s nanny has put up with a lot but even she drew the line at hearing Kim insult Blue Ivy, Beyonce and Jay-Z’s 2-year old daughter. Up until now, Bey hasn’t really tipped her hand in terms of her opinion of Kim. I mean, we all kind of figure that she wants nothing to do with her but can you imagine the verbal smack down that this could get Kim? Also, I wonder if Kim’s slamming Blue Ivy will lead to tension between Jay and Kanye — what do you guys think about that possibility?

This issue of Life & Style Magazine is actually dishing the dirt from a lot of different Hollywood nannies. There is an account of Angelina Jolie getting violent with Brad Pitt and those rumors about Jennifer Lopez not allowing the staff to speak to her, well they seem to be true! Speaking of children, Kelly Clarkson and Brandon Blackstock just welcomed their first child together and of course there was a bit of drama. There have been rumors about their marriage being in shambles after his rumored infidelity last year. Do you think parenthood is going to solidify these two or it their marriage already over?

Clearly there’s no love lost between Miley Cyrus and Selena Gomez. Life & Style has been keeping tabs on the two and brings readers up to date on how Miley recently tried to humiliate Selena. Do you think that these two will ever manage to form a friendship or is there just too much bad blood between them?