Robert Pattinson And Katy Perry Make Out Hot And Heavy At LA Party – They WANTED People To See! (PHOTO) 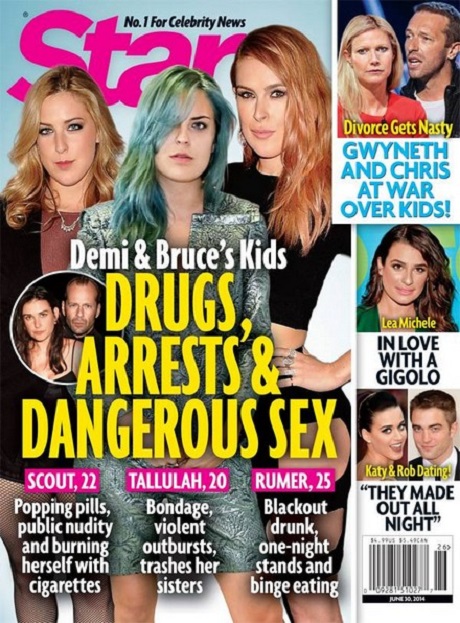 It looks like Robert Pattinson has played his cards at least a little bit right because Katy Perry is definitely seeing him as more than just a friend. A few months back she shot down the idea of ever dating Rob because he wasn’t really the kind of guy that she usually dates but something along the way has changed.

Katy attended the after party in LA that celebrated the premiere of Rob’s new film The Rover and according to the June 30th print edition of Star magazine the two spent a nice chunk of the evening making out on the patio. Forget about keeping things quiet. Katy obviously didn’t care who saw her kissing Rob and that has lead to some serious speculation regarding the twosome. They’ve likely been hooking up for awhile on the DL in order to feel comfortable making out in front of a bunch of people at a party, right?

We spend so much time focusing on the dysfunctional Jenner girls that other members of young Hollywood often go unnoticed. Take Demi Moore’s three daughters, Rumer, Scout and Tallulah for example. Star decided to take a look at their recent lives and the picture really isn’t pretty. Scout is supposedly a pill popper that also burns herself with cigarettes and Tallulah is rumored to be very violent. Rumer at 25 is into binge eating and drinking until she blacks out. Obviously all three of them could probably use the love and advice of a real mother but unfortunately they are stuck with Demi. That means that all three are pretty much on their own in terms of needing to pull themselves together.

Speaking of needing to pull themselves together — are Gwyneth Paltrow and Chris Martin divorcing or reconciling? There are conflicting reports of both but one thing is for sure according to Star and that is that they are feuding over their kids. I’m sure a cheeseburger truly is at the root of many fights between them, don’t you think? Will Gwyneth and Chris pull the plug for good?