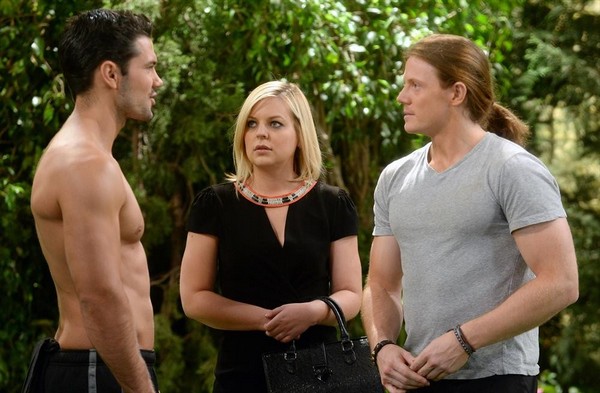 What follows is the recap and review for General Hospital week of June 16th – June 20th.  This week on GH we met a new character, Mickey Diamond who is (F)Luke’s right hand man.  The role is being played by Nick Chinlund and you can read all about what he is going to be up to, right here.

Monday-Felix is having second thoughts about his tie. Juan shows up to go to the funeral with Sabrina so that she doesn’t have to say goodbye alone. Sabrina ask for a minute.

Sonny strolls into Anna’s office and chews her for Ric’s death. Sonny thinks Ric was framed. Sonny tells Anna that since she didn’t hold up her end if the deal Duke shouldn’t be obligated to hold up his. Anna gets mad and they fight some more before Sonny takes off.

After Silas leaves for work Rafe comes stumbling out of his room with evidence all over his nose. Nina call him on it ant first he lies but then hands it over and pleads with her not to say anything. Nina tells him she won’t say a word and Rafe takes off.

Liz is picking up her last paycheck when Sam sees her and comes over to tell her she is sorry about Ric.

Patrick is at the church when Maxie arrives and gives him a hug. Patrick lets her know he and Robin’s marriage is over. Liz comes in with the stuffed animal Emma got her little brother she wants him to have it. Juan arrives with Sabrina and when she gets the chance she apologizes to Patrick for her behavior the day before. Sabrina tells him she is thinking about going back to Puerto Rico for awhile.

Nathan is jogging in the park when he sees Levi. They get into it over Maxie and the fact she ate Nathan’s meat. Maxie. Walks up just as Levi gets Nathan down. Maxie demands to know what’s going on and then makes Levi get up so they can go to the service.

Julian is talking to “Luke” on the phone he is concerned about how many more people will die. Duke shows up and threatens him and after he leaves Sonny pays Julian a visit to do the same.

Epiphany sings Amazing Grace. Later Sabrina and Patrick out the stuffed animal in the coffin.

Sabrina says a sweet goodbye to Patrick before heading off with Juan to Puerto Rico.

Tuesday– Julian tells Sonny he is sorry about Ric. Sonny tells him if it wasn’t for Sam and Danny he would kill him.

Kiki is visiting her mom and scolds her for breaking Morgans heart. Kiki is sure her mother is up to something and when Ava won’t offer up what Kiki wants Kiki storms out.

Morgan tells Michael that Franco is moving in with their mom. Morgan then gills him in on the fact Ava is carrying Sonny’s baby. Michael gets a idea.

Over at Carly’s while Franco is moving in Josslyn throws a fit and Franco has second thoughts but Carly tells him everything will be fine. Morgan shows up and tell his mom he is moving out.

Silas lets Nathan know that Nina knows about him and Sam. Silas reassures Nathan he isn’t going to hurt her.
Sam is talking to Nina when Nina notices Sam still wears her wedding ring. Nina comments about how hard it is to let someone go when you love them. Silas shows up and wants to know what is going on. Nina tells Sam has a problem with her living with him.

Wednesday– Morgan lets to slip that Ava is now living with Sonny. As soon as Morgan leaves Carly heads to Sonny’s, Morgan returns and Franco ask him to stay for Carly. Morgan won’t and tells Franco he should be more worried about his mom running to Sonny.

Michael tells Kiki he got Morgan Bobbie’s old house to live in. Kiki wants him to get them a place to. They start kissing and that’s when Tracy comes strolling in.

Dante shows up at Sonny’s offers he condolences for Ric and then lays into him for what he has done to Olivia. Sonny yells that he did it for Connie. Carly shows up in the Nick of time and feeds Dante some crap of a story. Dante doesn’t buy it. Carly is shocked that Sonny almost told Dante.

Lulu Rocco and Olivia are in the park. Olivia wants to know about Lulu’s appointment. When Dante shows up lulu tells can’t she wants to get the procedure done.

At the courthouse Maxie is staying her best not to freak out. Nathan shows up to do his part. Levi shows up followed by Diane. The judge thinks both Nathan and Maxie lied the last time he saw them. Nathan says they didn’t. The judge tells Nathan to talk under oath. Nathan agrees to it . Maxie is uneasy with that.

Nina continues to talk to Silas for Sam. When Nina is gone Silas wants to know what Sam was doing. She was just trying to get a handle on things. When Nina comes back in Silas tells her he is taking Sam out.

Thursday– Tracy tells Michael and Kiki that “Luke” isn’t who she though he was. She apologizes for being so hateful to Michael and wants him to give her a job at ELQ. Tracy even offers up the fact she is getting her marriage annulled. Michael agrees she can work there. When she leaves she gets a call from “Luke” and tells him their plan is working like a charm.

Anna lets Jordan know what is really going in with Ric. When TJ shows up Anna leaves. He wants his mom to quit working for Julian. Jordan tells him she can’t and TJ leaves upset.

At the courthouse it’s utter chaos much to Diane’s dismay. Maxie finally comes clean and tells the judge she missed the court date because she was afraid of the outcome.

Molly informs her mother that she is going to move in with Sam and takes off.

Once Sam is gone Nina ask Silas if it bothers him that Sam still wears her wedding ring.

Molly shows up at Sam’s. At first Sam isn’t sure about letting her move in but then when Molly mentions living with Carly Sam gives in.

Friday– Jordan is all over Julian demanding he tell her who they are really working for. Julian won’t tell her.

Anna is telling Alexis what a bit mistake it is for her to continue seeing Julian. TJ comes by looking for Molly Alexis tells him she is at Sam’s.

Silas tells,Nina Sam will take off her wedding ring when she is ready. They look a cracked plaque that he has. Silas reminds Nina that her mother did it. When Silas walks out Nina stands up and screams, she then has memory of her being the one who trashed Silas’s apartment and subsequently broke the plaque. Knew she was off, had to be.

Sam tells Molly how much Nina’s passive attitude bothers her. TJ shows up with flowers for Molly and she hugs him tight. Sam goes to change. Silas shows up to get her and tells Sam Nina just wants them to be happy.

The judge comes back with his ruling and it’s not in Maxie’s favor. He will look at it again in another six months. Maxie runs out broken hearted while Nathan and Levi argue over who did her more of a disservice.

When Dante gets home he finds lulu passes out in a messy house. Dante takes the food out of her hair, kisses her and then leaves for work. Lulu is talking to Rocco about how much she loves him when Maxie stops by. Lulu can tell how upset Maxie is and she hugs her.