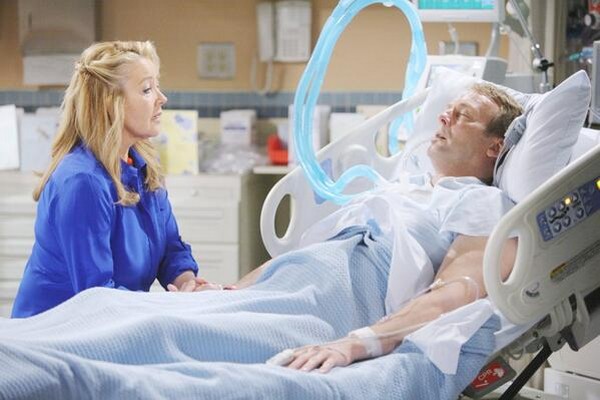 Monday– Billy and Chelsea are trying to out one over on Jenna and it seems to be working. Billy even manages to worm his way into the kitchen and do some snooping. Chelsea is trying to find out who her ex husband is but Jenna needs to leave to get her son. Jenna notices several missed calls from Ben.

Stitch tells Dylan even though he has the same blood type as Paul he still may not be a suitable match. Stitch take Dylan to be tested.

Jack is going to share his the kids are heading to Canada theory with the police.Harding lets Jack know they found Summer’s car by the bus station.

Summer tells Austin her first time was exactly how she thought it would be. Summer tells him she is going with him to Canada. Summer goes to take a shower and when she comes back Austin is gone and two police officers are outside her hotel room door.

Nick gets a call about Summer and has to leave work.

Nick is on the phone with Summer when Austin walks into police station to turn himself in.

Tuesday– Nikki and Victor find out from Willa that Ian can not father children and since the only other person Nikki was with was Paul that means he is Dylan’s father. Victor says they need to be sure.

Christine tells Lauren about a dream where Paul went away but a child brought him back. Dylan? Leslie is lurking near by.

Cane wants to take Lily to Paris . Lily has other things on her mind like stopping Hilary from destroying her family even more than she already has.

Dylan is with Avery wondering if he will be a match for Paul.

Neil shows up and tells Lily that he is marrying Hilary.

Dylan tells Nikki he is a match for Paul but he can’t be a donor.

Wednesday– Victor talks to Stitch about Dylan being Paul’s donor. Stitch tells Victor Dylan doesn’t qualify and Paul only has a few days.

Billy and Chelsea get busted by Jenna for lying. They head back to the hotel and decide to look into Kelly’s past.

At the police station after being questioned Summer ask Avery to defend Austin.
Kelly realizes through a conversation with Victoria that Chelsea and Billy did in fact go to Australia.

Back at the ranch Nikki tells Victor she wants to come back home and they kiss.

Thursday– Billy and Chelsea are looking into Kelly’s last when Chelsea grabs Billy and kisses him. Chelsea instantly wants them both to forget it ever happened. Before Billy heads back to his room they hug.

Kelly and Stitch are discussing his dilemma. Kelly says something about him being a killer?

Christine is with Paul when Father Todd arrives. Christine is afraid Paul will die and Todd reminds her Paul is a fighter.

Stitch goes to the chapel and cries about what he did.

Christine and Todd pray over Paul.

Jack and Nick are concerned about Summer’s crush on Austin.

Summer is still trying to get Avery to help Austin.

Kelly wants her and Jack to head back to her bed.

Cane tells Devon he need to tell Hilary how he feels before she and Neil get married.

Michael comes to Paul’s room and talks to Todd. Michael wants to know why Paul. Todd’s tells him he has faith in God’s plan.

Mariah was set up by Noah and Abby to take a the fall for his missing wallet. When it comes out that they set her up Sharon is disgusted and Mariah quit s her job at the underground.

Neil and Hilary discuss getting married right away and they decide in the next day. Devon shows up later and tells Hilary she would be better off with him.

Avery tells Leslie she is going to represent Austin. When Dylan arrives Avery tells him. Dylan can’t believe it. Avery explains that she has to do it.

Leslie stops by the ranch to tell Nikki she has proof that Dylan can’t be his and they Nikki can tell both Dylan and Paul.

Nikki goes to Paul’s hospital room and when everyone leaves she tells him he is Dylan’s father. Dylan is outside the door and hears her.