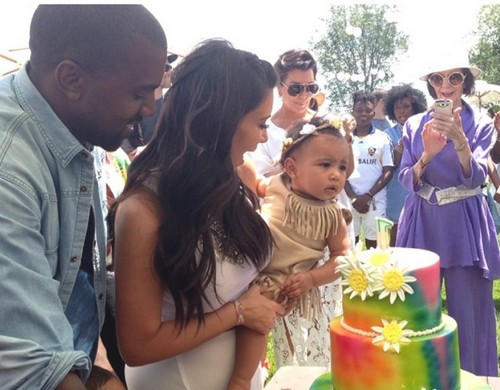 Kim Kardashian and Kanye West have come under a lot of fire for abandoning North West every time they travel abroad, especially since most of their trips aren’t necessarily for business but for personal pleasure. But in the last few weeks, Kim and Kanye have commenced sharing pictures of North on social media almost every other day, starting on Father’s Day and continuing into North’s first birthday.Kim shared a picture of North dressed in a fringe dress and flowers, looking like a Coachella mini-me. Appropriate, considering the fact that festival was named ‘Kidchella’, in honor of North’s first birthday and the Coachella-themed party. I think the Kardashians are the only family that would find hosting a kid-themed Coachella party to be appropriate. I mean, isn’t the festival most famous for drugs, partying, and a bohemian punk style nowadays? Should a little girl that just turned 1 be exposed to that type of theme, especially as a baby?

They also hired an actual Ferris Wheel for North’s birthday party, despite the fact that North is way too young to even care. The overall party itself was deemed to be a success, with many of Kim’s friends and extended family showing up. Of course, we saw absolutely no A-listers or even B-listers at the event, much the same as Kim’s actual wedding. I wonder if Jay-Z and Beyonce debated taking Blue Ivy this time around? Somehow, I doubt it.

What do you guys think of North’s first birthday? Do you find it extravagantly over-the-top or appropriate considering the hosts? Let us know your thoughts in the comments below.