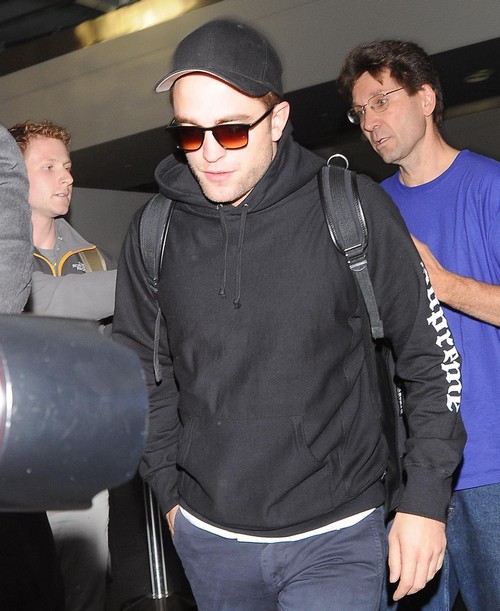 Robert Pattinson has become an expert at hiding from the paparazzi, but who knew that he would manage to keep an entire relationship away from the media? According to the Telegraph, Rob has been dating Imogen Kerr undercover for the past few months, despite the fact that most of the tabloid rumors still center around his reunion with Kristen Stewart.

Now, Rob recently stated in an interview that he was single, but maybe he was just lying to protect Imogen? Rob and Imogen were photographed together in LA a couple of months ago, and the media went nuts trying to identify Imogen at the time. When they did, every single tabloid reported on the event, and referred to Imogen as Rob’s new rebound girlfriend. So perhaps Rob is just claiming that he’s single to keep the media attention away? After all, the minute he says he’s dating someone, people would jump all over his words and start speculating away – linking him to everyone from Dylan Penn to ex-girlfriend Kristen Stewart.

The quote from the Telegraph stated, “He is currently dating model Imogen Kerr although he politely declines to talk about his romantic life.” Now, he obviously doesn’t comment on his relationship, but it’s interesting that the Telegraph writes that down as fact. Did Rob confirm the romance to them, off the record? Did Rob’s team tell them to include that? Were they just guessing at the romance based on paparazzi evidence? We can’t say for sure, only that they seem pretty confident that Rob and Imogen are dating.

Considering that the Telegraph is a pretty legitimate source for news, I’m going with this as confirmation of Rob’s new romance. While it’s probably devastating to Robsten shippers, they were going to have to face the reality sooner or later – their beloved Rob and Kristen are not going to get back together.