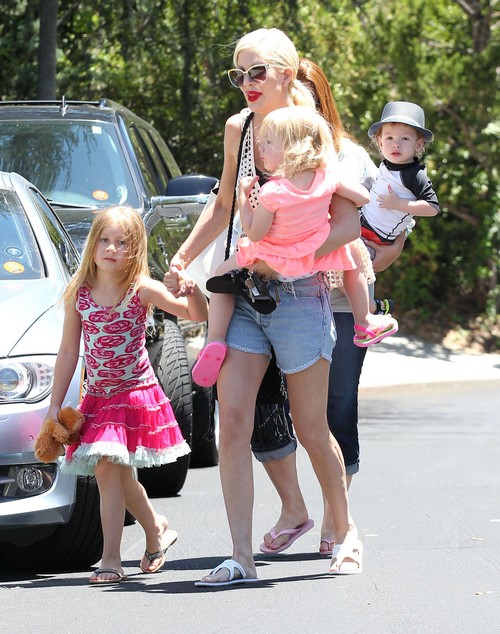 Tori Spelling has wanted us to feel bad for her for months now. One of the many reasons for that is because she and Dean McDermott are supposedly broker than broke. Tori admits that they have lived beyond their means for years now in order to keep up with the Hollywood lifestyle that she demands. Tori talked in one of her recent books about squandering money and to here her tell it she had learned her lesson and was aiming to become more financially responsible. That concept totally went out the window recently when Tori dropped a cool $6,000 on her 6-year old daughter Stella’s birthday!

According to the June 30th print edition of Life & Style Magazine broke Tori took Stella and a bunch of her pals to La Chic Spa for manis-pedis, facials and makeovers. The tots also dined on Sushi and went home with spa robes. Tori spent $90 per child and the day was loaded down with extravagant spending. Of course she tried to act like it was a perfectly normal birthday party for a small child but dropping that much money while screaming that you’re broke sure raised eyebrows!

Do you guys think that Tori is as broke as she has claimed or is it her ridiculous spending habits that demolish her bank account? She has obviously made some bad choices over the years but I can’t help but think that she really has had plenty of money to work with.  Why on earth would she spend 6 grand on a 6-year old? Do you think it’s another example of Tori trying to keep up appearances? Tell us your thoughts in the comments below!