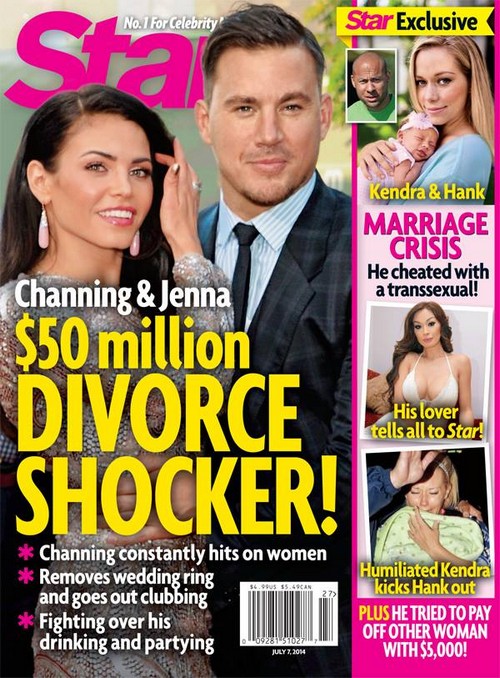 Nothing lasts in Hollywood, maybe not even the marriage of Channing Tatum and his wife, Jenna Dewan-Tatum. While lots of other celeb couples have imploded right in front of the press and a legion of fans I think we all kind of believed that these two were rock solid. Channing’s career has skyrocketed in recent years and Jenna has held her own on camera too in between the pregnancy and birth of their baby daughter. Most of all when Channing and Jenna hit that red carpet they seem very tight so hearing that there are some cracks in their marriage is pretty sad.

According to the July 7th print edition of Star Magazine Channing’s behavior isn’t quite jiving with what Jenna expects a father to do. Instead of hanging at home Channing has been ditching his wedding ring before heading out to the clubs and when he returns home he’s drunk. Perhaps Channing clued us into the problems himself several weeks ago when he referred to himself as a high functioning alcoholic. Obviously Jenna does need to have two sloppy babies on her hands and if things don’t change quickly a $50 million divorce is right around the corner.

Speaking of divorce, poor Kendra Wlkinson has a serious disaster on her hands. Knowing that her husband Hank Baskett hooked up with a transsexual has to be absolutely crushing but now this chick isn’t going away. Instead Ava Sabrina London is talking to anyone that will cut her a check and that includes Star Magazine. What do you think Kendra will do? Is she going to have to make a statement about the situation since the entire world knows anyway or is she going to lay low and wish that it would all go away? Tell us your thoughts in the comments below!