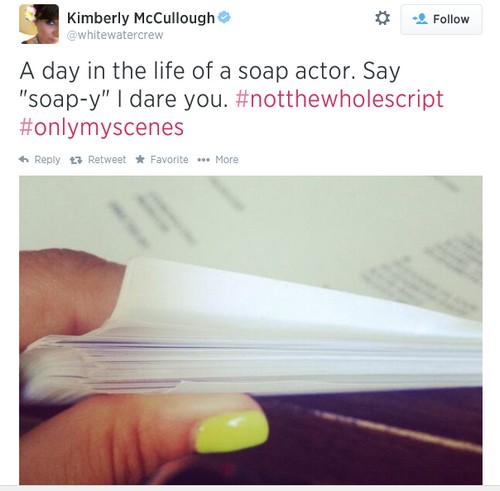 Kimberly McCullough loves working on General Hospital in part because they’ve been very good about letting her leave the show to do other things without the fear of her role being recast. Kimberly has portrayed Robin Scorpio for nearly 30 years now and it’s hard to imagine the character being played by anyone else. Luckily, the fans won’t have to worry about that happening any time soon because Kimberly is gearing up to return as Robin just 3 short months after leaving.

Back in March Kimberly said that her heart was in directing and that after 6 months on General Hospital she was ready to leave to go and do that. She ended up working over on Grey’s Anatomy for a bit and just yesterday Kimberly teased her fans by tweeting a pic of her new (surprise) GH script.  In the past Kimberly has said that she returns to GH when it really makes sense for the character of Robin to be there. According to Celeb Dirty Laundry since Robin left Port Charles in search of her good friend Jason Morgan then logic says that she will probably be returning with him.

Rumor has it that former Y&R star Billy Miller has been cast in the role of Jason and he’ll be replacing the super popular Steve Burton who portrayed Jason for 20 years. If the writers give the fans a few scenes where Robin and Jason really connect then it’ll be a whole lot easier for the longtime fans to accept him in the role. Recasts are tough but if GH handles it well then an actor of Billy Miller’s caliber could win fans over pretty quickly.

There is no better reason for Robin to return than to introduce a brand new Jason to longtime GH fans, don’t you agree? How long do you think that Kimberly will stick around for this time? I’m betting it’s just a quick stop for now. Tell us your thoughts in the comments below!