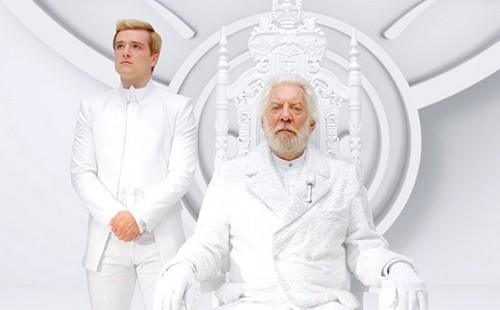 The promotion for The Hunger Games: Mockingjay – Part 1 is kicking into high gear, and we’ve just received our first official teaser trailer for the movie. It’s a neat piece of Capitol propaganda, showing President Snow [Donald Sutherland] simultaneously inspire, reassure, and threaten a nation all at once. Only Donald Sutherland could have pulled off that speech without making it sound schlocky.

However, the big ‘reveal’ of the teaser is when the camera slowly pans out to reveal that it’s Peeta Mellark [Josh Hutcherson] who is standing next to Snow. Is he brainwashed? Is he just playing along? Readers of the book will know exactly what’s happening, but movie fans will have to wait a bit longer to find out.

Overall, the trailer is a very effective piece of movie propaganda. It both serves to illustrate the story at hand, but also work as an effective piece of promotion without giving away any major movie secrets. And keep in mind, this is just the first teaser trailer, rumored to be playing in front of Transformers this weekend. Several online sources have said that we will be receiving a rebel-oriented second teaser trailer in the coming weeks, before the full theatrical trailer is released at Comic-Con this year.

Seriously, Lionsgate’s marketing team has been knocking it out of the park with these movies. Snow’s ‘Panem Today, Panem Tomorrow, and Panem Tomorrow’ sent chills down my spine.

What do you guys think of the trailer? Let us know your thoughts in the comments below.